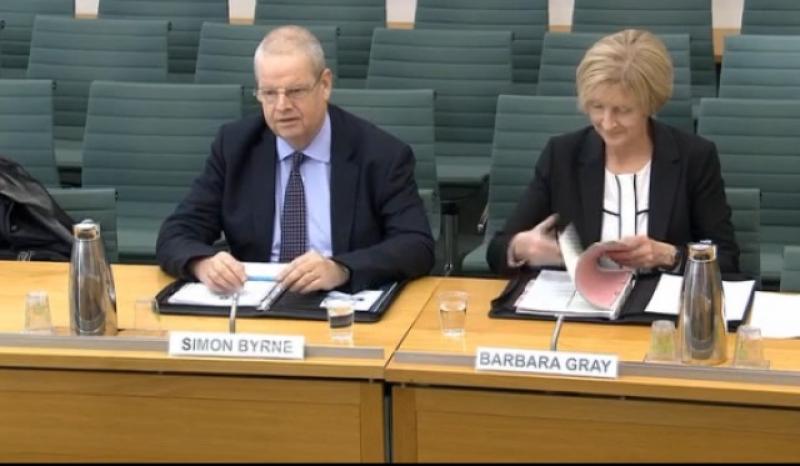 The PSNI’s Chief Constable has refuted an accusation of two-tier policing after a Labour MP said there is a perception that it’s “easier” for the police to pursue loyalist paramilitaries rather than republicans.
Kate Hoey made the comments at a meeting of the NI Affairs Committee as it heard evidence about organised criminality in NI.
She said the Paramilitary Crime Task Force is investigating loyalist paramilitaries whenever, she claimed, the amount of money they have laundered is “terribly small” in comparison to that “laundered by the provisional IRA over many, many years, particularly after the Northern Bank robbery.”
She said there is a perception that it’s “easier” to go after loyalists and not “politically expedient” to go after the Provisional IRA.
The Chief Constable dismissed the inference of a two-tier policing system against people from different backgrounds and assured Ms Hoey that investigations are “prioritised”.
Barbara Gray, Assistant Chief Constable, added that the Task Force has looked at amongst others, the UVF and INLA. She told the committee a “massive” amount of effort is going into opposing the threat of dissident republicans but resources are spread “equally” between loyalist and republican activity.
DUP MP Jim Shannon probed when the PSNI is going to tackle “criminal gangs masquerading as paramilitary groups” and seize assets from their legitimate businesses, “be it shops, taxi firms or security companies”.
“There might be cases when the only way of addressing these criminal empires is to use the Al Capone tax evasion methodology to ensure that you can take on where their assets are and where they’ve got their money from.”
He added: “When it comes to addressing organised crime gangs is there a real strategy to take on their assets, strip them of their assets, take them away from them, make them poor?”
In response Mr Byrne “broadly agreed” with the approach but said complex investigations take time to build up sufficient evidence against “Mr Big” and he believes everything that can be done within the law should be done to combat “brutal” paramilitaries.

The “brutality and pervasiveness” of paramilitary crime has “shocked” the Chief Constable, he said.
Mr Shannon also asked if there is cross-border cooperation in place between the PSNI and An Garda Síochána to deal with paramilitary groups. He indicated that explosives and weapons used by groups in Derry have come from the Republic of Ireland.
Mr Byrne said that relations with the Garda are good and used the mortar device found in Strabane last month as an example of positive cross-border cooperation.
Committee Chair Simon Hoare commented that “wealth and terrorism are two sides of the one coin” and questioned whether enough is “proactively” being done to tackle it.
It is estimated that there are currently 88 organised crime gangs, comprised of around 450 people, 30 of which are assessed as having cross-border links. These people are connected to gangs in Far Eastern countries, as well as Romania, Lithuania and individuals from Nigeria, with drugs and money laundering cited as major cross-border issues.
The PSNI said it has disrupted these gangs around 100 times in the past year and made significant arrests around money laundering and human trafficking.