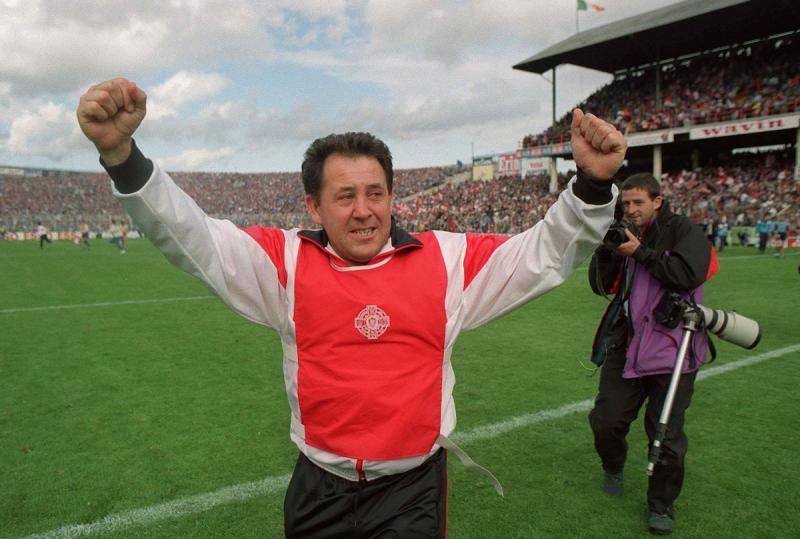 Last Friday marked the 14th anniversary of Eamonn Coleman's death, an unrivalled icon of Derry football. The affable Ballymaguigan man will be forever remembered for one reason, how he built and polished a team into kings of the land.

Gaels flocked from every corner of the land to attend his wake, thronging to the shores of Lough Neagh to pay homage to someone who was more than a football manager.

It was the same a year later, in 2008, when the Derry 1993 team played an All-Star select team on his beloved Ballymaguigan pitch, with proceeds raised donated to charity. The sun shone in abundance for a very fitting tribute to the man Henry Downey called 'Mr Derry football' in his speech after lifting Sam Maguire, the game's greatest prize.

Yes, he had a knowledge of the game and after a distinguished playing career, he had success as a manager everywhere he went. But, perhaps more importantly, Coleman possessed the greatest trait, an ability to unite those around him.

And he had an unbreakable belief in the Derry team he took charge of at the heel of 1990. His son Gary spoke of a stranger approaching him at his father's wake, telling him he was on the same flight home from London.

Eamonn told him he was coming home to see his family and to take charge of the Derry senior team, setting a target of winning the All-Ireland within three years.

Growing up, I appreciated and was inspired by the Derry team he managed, but wasn't old enough to ever have known the man behind the county's greatest ever era.

As the years have passed, it's the fondness with which he was remembered by the players that speaks volumes.

Age. Club. Occupation. Family background. Those things didn't matter. Coleman's only currency was football and building a team to challenge what the rest of Ireland had to offer.

He would plonk himself at the back of the bus, in the middle of the card school and in the crux of the banter. But inside the dressing room, when they reached the pitch, the players knew who was boss.

“He had a unique quality of being very, very close to the players, but still being able to maintain very high standards and if needed, he's give you both barrels between the eyes ,” recalls Enda Gormley, who commented on Eamonn's footballing knowledge and 'unequalled passion' for football, particularly Derry.

It shone 'like a beacon' and, in Gormley's eyes, Coleman was the best reader of people he had experienced. He knew what made everyone tick.

Kieran McKeever also points to how his former boss managed people. In Eamonn's eyes, the team was 'everything'. He knew when it was time for an arm around the shoulder and, likewise, when the riot act needed to be dished out.

“He talked and managed all players on the panel all the time, not just on the week of a match,” McKeever added.

Eamonn Burns backed up the others' thoughts on Coleman's football knowledge, by extending how well he knew footballers across Ireland.

Richard Ferris spoke of nights at training when it was horses for courses, depending on the opposition coming around the corner on a Sunday. Coleman put Ferris on Kieran McKeever, with the instruction to run at him like James McCartan

“Take him on,” Ferris was told. On another night, the Drumsurn man was placed at midfield and told to run Brian McGilligan from box to box, to see if he'd have the legs to track Jack Sheedy up and down Croke Park. Dermot McNicholl's direct running was unleashed on Henry Downey, to test the skipper's ability on the back foot.

All away from the colosseums of Ireland on a Sunday, the attention to detail behind the man brought another edge. And all in the name of Derry.

One evening, under Glenullin's floodlights, Tony Scullion speaks of players almost coming to blows, such was the competition for places. There was a cheeky grin across Coleman's face. He had the players where he wanted them, primed for battle.

“You told us we had to fight for our place,” Scullion remembers saying to his manager one night when he tried to get a couple of players to cool their jets. I can still see Scullion's eyes, almost popping out of their sockets, as he recalled the moment.

Personality, football knowledge, enthusiasm and mischief, all in 'equal measure' was Eamonn's Burns' summary of Coleman. If his former boss was still alive, he'd cherish an hour shooting the breeze over a cuppa and the craic it would generate.

Burns adds how Coleman was a 'straight talker' with everyone, players, referees, opponents or the media. There was the famous 'youse boys know nothing about football' he taunted the media with, which is emblazoned on a sign in the Owenbeg press box.

Stopped by a journalist getting off the bus in Clones and asked if he knew where the Derry manager was, Coleman, while keeping a straight face and sending him on a wild goose chase, pointed the unversed journo in the direction of the dressing rooms.

From chatting to those who soldiered with him, you soon get the picture of someone you'd grow to love and go to war with.

“He was able to gel all the individual talent in Derry, amid a fairly toxic club scene, and get the county playing like a group and believing they could win national titles,” Burns added.

“He believed from day one that we'd win the All-Ireland and he drummed that into us,” Ferris adds. The statement on the plane home from London wasn't a sweeping statement.

Derry's All-Ireland final goalscorer Seamus Downey describes him as a 'pure people person'. He just had that way with him.

On the night he was set to announce Henry Downey as captain, Eamonn turned up outside his Physics classroom at St Mary's Magherafelt earlier that morning to break the news to him. With Downey unavailable until lunchtime, Coleman sat at the back of an A-Level class for an hour before heading up the town for a bite of grub.

At the suggestion of being appointed captain, Henry said he needed time to think about it, but his manager was having none of it. He said he was announcing him captain regardless, before they shook on it.

They would've gone to war for him and they did. Then, when he was sacked by the county board a year later, they stuck by him. That's how the dynamic of a team in the trenches together operates. One for all and all for one.

And it wasn't just at home that he is revered. After Derry's win over Cavan recently, groundsman Seamus Galligan and Mickey 'The Pound' Reilly, part of Martin McHugh's backroom team in 1997 glory year, were closing up the gates of Kingspan Breffni as I left.

There was still time to analyse the game and proudly recall Cavan's Ulster success last year. Two excellent football men, they expressed their approval at Derry's performance and referenced how animated Rory Gallagher was along the sideline.

It reminded them of Coleman. Whether it was the county team or Gowna, Coleman lived on the edge as he cajoled his side to go places they didn't feel they could. The Cavan duo spoke about the Ballymaguigan man as if he was one of their own. That's the lasting legacy of Coleman.