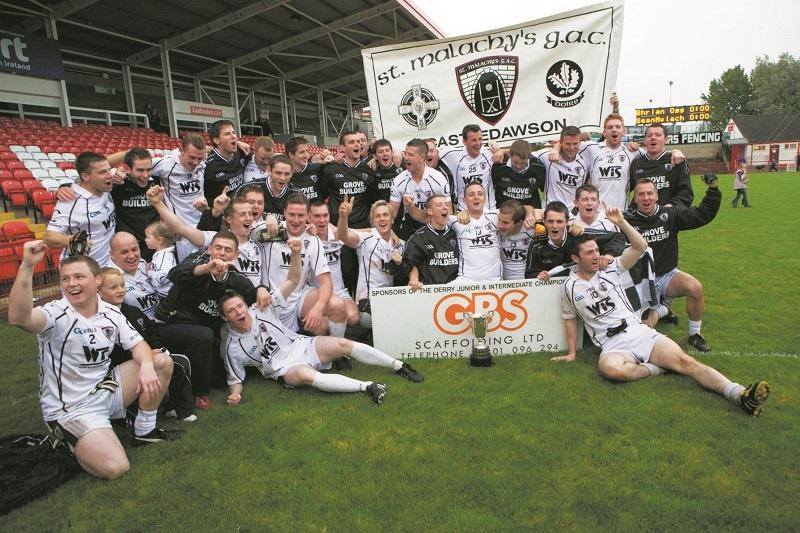 With less than a minute of stoppage time to go, he wound up the kick to send the club's long-suffering fans into hysteria.

It was a victory for the small pocket of Gaels in the Broagh. On a soggy afternoon, they had to fight tooth and nail against the brilliance of Stephen Cleary who looked he was going to swing the momentum Steelstown's way.

As winning captain Martin Heaney climbed the steps to accept the cup, there was a feeling his late brother Adrian was with them every step of the way. Their 16th man.

It could've been oh so different. When former Down underage player Gary Cunningham found Cleary in a pocket of space on the 40 metre mark, he arrowed over a point that saw Steelstown edge ahead with time up.

A minute into injury time, Cleary's former Derry minor team mate Paul Heaney shanked a chance and it was another to add to Castledawson's litany of wides. But there was still time.

It was a white jersey that won the kick-out and as Steelstown poured back to cover Dermot Heaney, it allowed Declan Lavery to find Niall McNicholl who levelled the game.

The game was in the mixer. Was there time for one more hero? When Martin Heaney found Paddy Henry with a pass, he dissected the posts to win the game.

What a contrast of emotion. Steelstown were distraught, the 'Dawson were in dreamland.

The first half yielded just eight scores in the incessant rain, but Castledawson’s wides tally looked like it would haunt then. They hadn't made their control count where it mattered. Would their 0-5 to 0-3 lead be enough?

Steelstown shut Castledawson out in their championship meeting earlier in the summer and Paddy Linden's side tried to kick from outside the blue wall.

Three of their first half scores were from frees and it was a long-range effort from the impressive Ruairi Shivers that was a rare moment of magic.

He had given Mickey McKinney plenty to ponder and he could've found the net but goalkeeper Marty Dunne denied him. At the other end Mickey O'Kane denied Daniel Jackson, with James off-target from the rebound.

Steelstown posed little attacking threat in the first half, but graft kept them in touching distance, helped with points from the Cleary brothers – Aidan and Stephen.

Castledawson were 0-8 to 0-4 up nine minutes into the second half, but things started to turn with the introduction of Gary Cunningham. He was able to use his balance and poise to pick out Stephen Cleary on Steelstown's inside line.

With four minutes on the clock, Mark Foley levelled the game, before Stephen Cleary edged them ahead.

But Castledawson still believed. A replay might have been fairer but Paddy Henry was reading a different script. It was Castledawson's day.