A County Derry Irish language group has launched a revamped version of a popular reading scheme to make it easier for parents to read with their children at home. 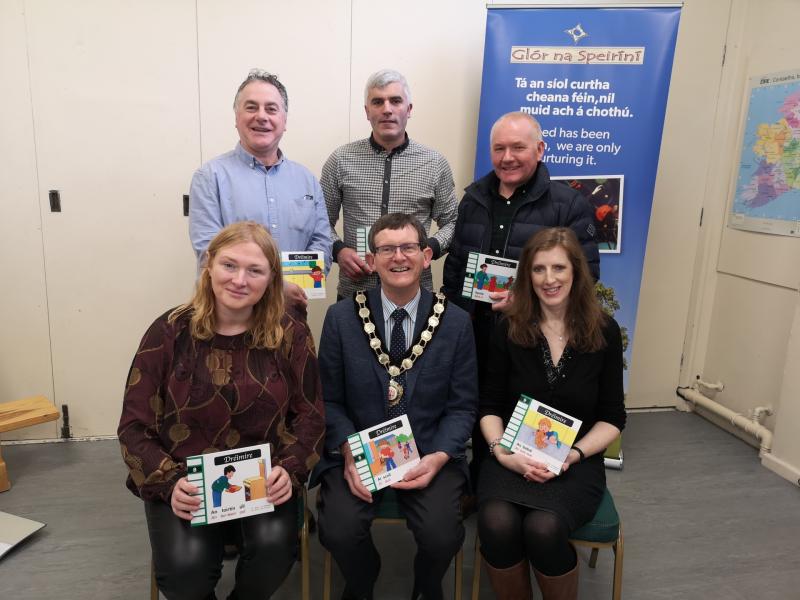 Members of Glór na Speiríní with an updated version of the Dréimire reading scheme.

A County Derry Irish language group has launched a revamped version of a popular reading scheme to make it easier for parents to read with their children at home.

‘Dréimire’ translates as ‘ladder’ and was first published in the late 1990s as Irish medium education continued to expand.

The iconic scheme has sustained the sector for over 20 years, but Glór na Speiríní identified an opportunity to further enhance children’s reading and parental engagement.

Conchúr Ó Muirí, the group’s Irish Language Development Officer, said he hoped the move would help parents who may not speak enough Irish to be able to help their child learn to read.

He told the County Derry Post: “Parents who send their children to Irish medium schools sometimes feel a bit isolated because they don’t have Irish.

“This is a book that is in all the bunscoileanna anyway, so the idea was that the parents could read it with them.

“The way it’s laid out is fairly straightforward. Hopefully it’s foolproof, but everyone’s dialect would be different.”

“I’d love to do another one for a Key Stage 2 reading scheme. What we want to do is provide it to areas that want it. There were only 1,800 books printed, so we’re tied a bit in that regard.”

Glór na Speiríní had mooted the idea a few years previously but were unable to proceed as they weren’t able to secure the funding.

Conchúr thinks the revamped scheme will encourage parents to get involved in their child’s reading and take away any reluctance that may exist.

He said: “We put phonetics underneath the Irish transcript so a person who has now Irish at all can read to their children at night.

“It’s a way of supporting the child and feeling part of their education and that was basically the idea behind it.

“It’s giving parents a bit of encouragement to read to their child and raise their interest in reading.

“They might be timid at the start but by the time they get through all nine books they’ll be flying at the end of it!”

With children experiencing increased amounts of screen time, Conchúr hopes engaging parents in reading to their children will help them wind down at night and strengthen the parental bond.

He said: “I think it will have a positive impact because when you look at the way technology is advancing, a lot of children are going to bed with phones and iPads.

“Their brains are active all the time with these devices.

“This way, you can put all that technology away for a while and the parent can go in and read to their child at night.

“It’s bound to have a positive impact, not alone on the child but also in strengthening the bond between parent and child.”