A County Derry woman returned to her former primary school last week to launch her new book which focuses on an issue familiar to many students. 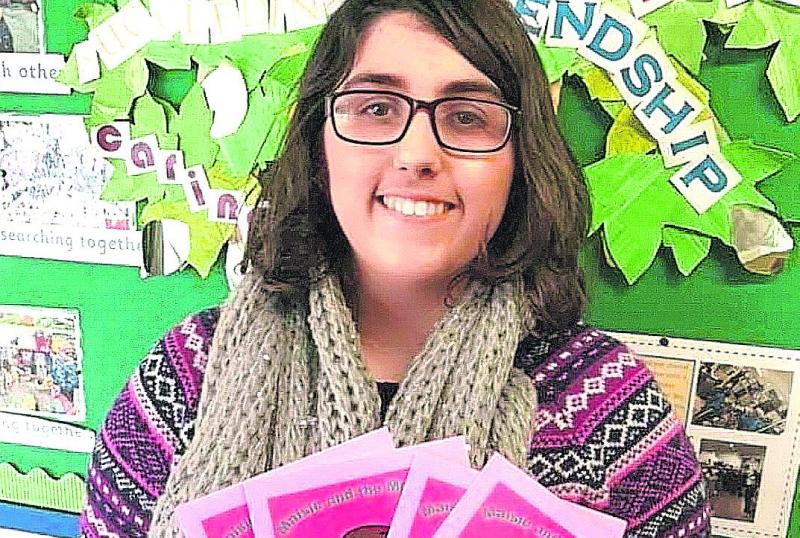 Alice Dobson with a copy of her new book.

A County Derry woman returned to her former primary school last week to launch her new book which focuses on an issue familiar to many students.

22-year-old Alice Dobson brought her new book, Maisie and the Monster, to the pupils at Bellaghy Primary School last Monday and is hoping it will help children struggling with anxiety.

The Lancashire-born author was diagnosed with Autism Spectrum Disorder (ASD) last year and got the idea for the book while out on a walk to help her deal with her own anxiety.

She told the County Derry Post: “Without giving too much away, the story tells about a little girl called Maisie who suffers with worry and anxiety and how she deals with it.

“After being diagnosed with anxiety due to ASD, I started to walk to clear my head. I just kept thinking; how could I describe what I was feeling?

“The idea of carrying a heavy, noisy monster that wouldn’t go away came to mind and I was able to put all my feelings down on paper through the pictures.

“I worry a lot every day about everything, anything and nothing - it can sometimes take over.

“Like the character in my story, I find that talking about my worries really helps me to feel less anxious.”

According to Autism NI, in 1 in 30 children in Northern Ireland have a diagnosis of autism, while 1 in 6 young people are affected by an anxiety problem at some point in their lives.

Alice has experienced that anxiety and is hoping her book will help others recognise and understand it.

She said: “I find socializing difficult and experience difficulties when faced with new environments and situations.

“Any change from my normal routine causes problems. I struggle with maintaining eye contact and I find it very difficult to read facial expressions and emotions.

“As I’ve struggled with anxiety most of my life I decided to publish Maisie and the Monster in the hope it will help others who have their own struggles, but also help others to understand a little about what anxiety can feel like.”

'Dreamer'
The Animal Management student, who also attended Sperrin Integrated College, says she was often described as a ‘dreamer’ while in school, but she has put that imagination to good use.

“As a child I was often told I was away in wonderland as I daydreamed a lot in the classroom.

“My head was always full of stories so as a hobby, along with drawing, I decided to put my stories onto paper.”

While Alice insisted she has no plans to pursue a career as an author, she refused to rule it out and hinted that a sequel would not be out of the question.

“I hadn’t planned a sequel but never say never. We’ll see how this one goes,”concluded Alice.

Copies of ‘Maisie and the Monster’ are available on Ebay.