County Derry firefighter tells of charity’s support ahead of fundraiser

Firefighters in Maghera are hoping to raise £20,000 for three different charities after some of them were touched by the charities' support in recent months. 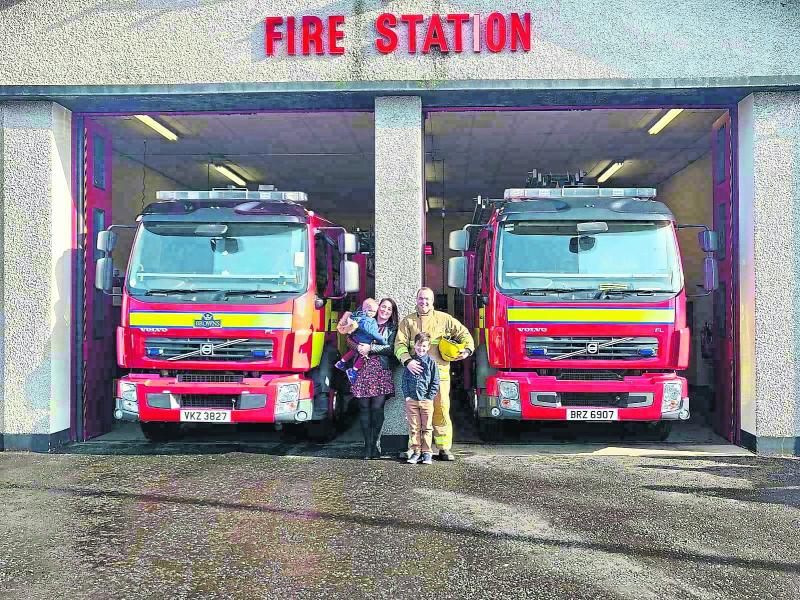 Barney Regan with his family at the local fire station where he is based.

Firefighters in Maghera are hoping to raise £20,000 for three different charities after some of them were touched by the charities' support in recent months.

This week we hear the story of Barney Regan, whose son Michael was diagnosed with Juvenile Myelomonocytic Leukaemia (JMML), a life-threatening form of leukaemia, at just five months old.

“Michael was born with low platelets, which was a worry from the start,” Barney told the County Derry Post.

“He started to take one infection after another and then after five months he was diagnosed with JMML.”

“The staff at in the haematology department at the Royal Victoria Hospital were brilliant and really helpful.”

Michael required a bone marrow transplant and when his six-year-old brother Charlie was discovered to be a 10/10 match, he volunteered to undergo a procedure many adults shy away from.

“It was a brave thing for Charlie to do,” said Barney.

“There are lots of adults that go as far as saying they’ll donate and then when it comes to the point where they discuss sticking needles into the bottom of their spine and hips, they say no.

“For a six-year-old to do it is so brave, and it’s not like we were saying ‘you’re going to do this’.

“A team came out to talk to him and used a toilet roll tube to show how the bone marrow was extracted.

“If they find, at any stage, he has a fear of any aspect, they stop it, but he kept saying ‘I’m doing this for my brother’. He’s amazing.”

With the procedure unavailable for children in Belfast or Dublin, the Regan family travelled to Bristol in September 2018, but, heartbreakingly, the transplant failed.

“Unfortunately, Michael picked up an infection and it didn’t work.

“We were going back and forward to Bristol to get different top-ups and things to see if it would kickstart the transplant, but unfortunately it didn’t, so the world-wide search began again.

“We got a match in June 2019. A woman in Canada donated her newborn baby girl’s placenta and they had taken stem cells from it, known as a blood cord donation.

“To get a match from a totally unrelated stranger across the world is phenomenal.

“Thankfully, he’s now on the right path and they’re starting to wean him off anti-rejection drugs - his medication has gone from a full kitchen worktop down to three or four bottles.

“Finding a donor was so crucial and I’d encourage everyone to sign up to the stem cell donation list.”

Michael’s second procedure was shorter than expected, and the family got to spend Christmas together at home.

Barney reflects on a stressful time and is thankful for the family support, particularly that of his mother Karen.

“There was unbelievable stress on the family and on the business – I run Regan’s bar in the town.

“For the second transplant, Charlie was at home with my mother, who has been amazing.

“She looked after Charlie for three months after he donated his stem cells and then again during Michael’s second transplant.
“She was looking after him and the bar at the same time, keeping the business going.”

Barney’s chosen charity is Angel Wishes, a Northern Ireland-focused cancer charity, who are volunteer-run, with every penny raised going to charity.

“Angel Wishes first got in contact with us after Michael’s second transplant. Gaye, who runs the charity, rang to ask how he was as he’d slipped their radar.

“My wife Nicola told her he’d had to go for a second transplant, and from that day, Gaye gets in contact every week to see how he is.

“She sent toys when he was in Bristol every week and the charity gave us a financial donation for flights back and forth.

“The NHS pay for flights over and back but anything in between times, we have to fund ourselves, so the donation helped us to fly Charlie over to visit to break the whole thing up.”

A team from DKMS Donor Registry will be at the street collection on May 2.

If you would like to make a donation to the firefighters’ fundraising effort, you can donate via their Just Giving Page - https://www.justgiving.com/crowdfunding/magherafirefighters-runforlife-1