A well-known sporting figure in County Derry has been honoured with a special award for how he has coped with life-changing injuries. 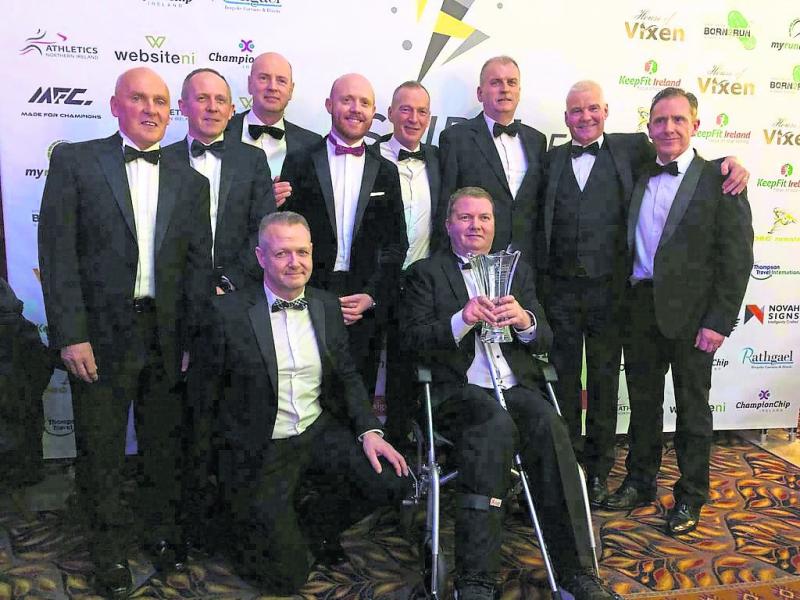 Francis Stewart with friends after being honoured at the Spirit of Running awards ceremony.

A well-known sporting figure in County Derry has been honoured with a special award for how he has coped with life-changing injuries.

In June 2015, Francis Stewart suffered terrible injuries when he was knocked down while cycling on the Cookstown to Moneymore dual carriageway.

The 49-year-old had been an accomplished runner with the Magherafelt Harriers Running Club.

He continues to be involved in the club and was appointed President shortly after his accident.

In recognition of his commitment to helping others, Francis, known locally as 'Coach Francis', picked up an award at the Spirit of Running NI Awards Gala held in Armagh City Hotel over the weekend.

His close friend, Paul McErlain, nominated Francis for the award, which was presented by the BBC presenter, Barra Best.

Paul said: “We wanted to give recognition to the devastating injuries that he suffered and the impact it has had on his life and his family’s life.

“He’s shown exceptional determination and courage. He spent five months in hospital and four weeks in a coma. It’s emotional for him and for us all.

“Francis has great support from the club and his family and friends, who help him keep that drive for running going.”

The Spirit of Running NI Awards are presented every year and seek to showcase all that is special about running in Northern Ireland.