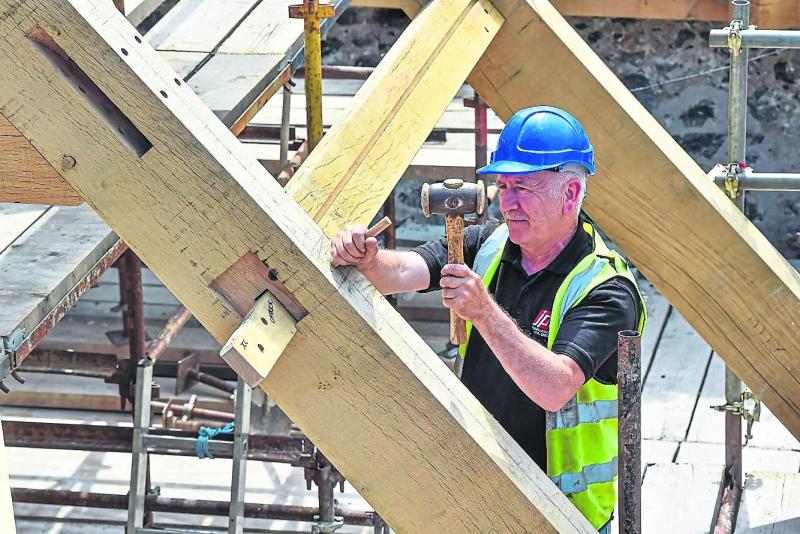 James O'Kane was the JPM Contracts foreman on the Carrickfergus Castle project.

A Dungiven company has played a leading role in restoring one of Ireland's best known castles.

A new roof on the 800-year-old Carrickfergus Castle in County Antrim was unveiled last week.

It was built over the course of a year as part of a £1m conservation project.

One of the companies involved in the massive regeneration project was locally-based JPM Contracts.

The new roof replaced a flat roof, which was built in the 1930s that had been leaking rainwater into the tower's upper levels.

The new roof was built using detailed medieval techniques and Irish oak harvested from trees which fell down during 2017's Storm Ophelia.

The tower was built by Anglo-Norman knight John de Courcy in the late 12th century as a focal point of his Earldom of Ulster, and was protected by the sea on three sides.

Another knight, Hugh de Lacy, added to the castle complex.

A spokesperson for JPM Contracts said they were honoured to be part of the team which has restored the castle to its former glory.

“It is not every day you get to be involved working in a medieval castle, especially of such high significance,” the spokesperson said.

“The work started in March 2019 to replace the existing flat roof which has been in place for the past 80 years. The new roof is keeping with the late-medieval architecture of the Castle.

“It has made from Irish Oak used ‘green’ and oak-pegged without the use of nails or metal fixings.

“The Irish Oak was sourced from oak trees which came down in Wicklow during Storm Ophelia in October 2017.
“The new roof is a series of open trusses and rafters carrying oak boards.

“Externally the roof is finished in Cumbrian stone slates and lead.

“The external appearance of the Castle does not look significantly different from ground level as the roof is behind the battlements.

“However, internally, the Great Hall at the top of the Tower has been transformed into a higher, brighter and more historically resonant space.”

Minister for Communities Deirdre Hargey said: “This investment has secured the future of this important monument and prevented irreparable damage to the structure.

“Archaeologists and conservation architects within the department worked together to design a historically appropriate roof,” said the Minister.

“What has been achieved is an outstanding piece of architecture that safeguards this important and historic place.”