An Air Ambulance paramedic from Co Derry is set to scale to great heights in a bid to raise funds for the life-saving service. 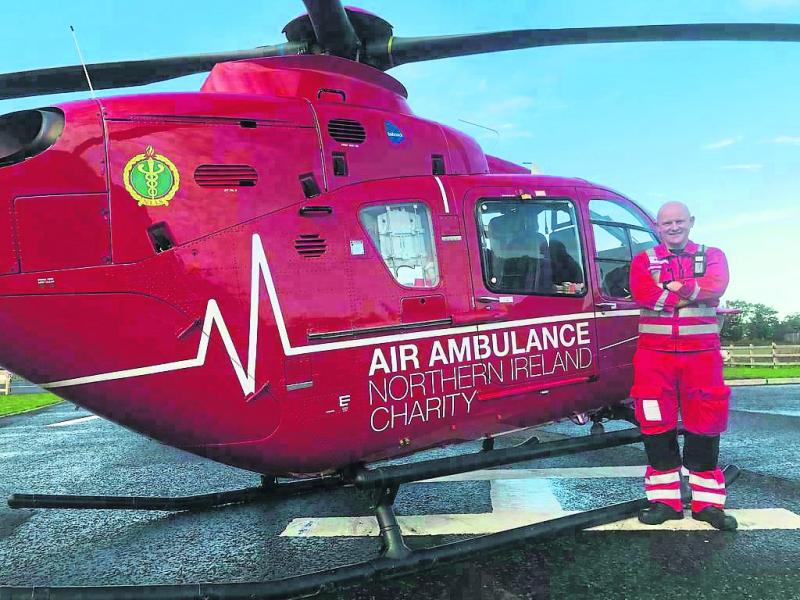 Air Ambulance paramedic Jason Rosborough from Eglinton who will become he first person to scale down the Tower Museum to raise funds for the life saving service.

An Air Ambulance paramedic from Co Derry is set to scale to great heights in a bid to raise funds for the life-saving service.

Jason Rosborough, a Helicopter Emergency Medical Service (HEMS) paramedic from Eglinton, will become the first person to abseil down Derry's Tower Museum when completes a charity abseil next month.

Speaking to the County Derry Post ahead of the March 1 event, the 34 year-old said he decided to run the fundraiser after being approached about doing the dare-devil task.

He said: “I was aware that there was an abseil happening in Derry at the Tower Museum and as I’m from Eglinton, so I’m a Derry man and I was asked if I was interested in coming along.

“I’ll be first down – if the rope will hold me! I don’t know how high the Tower Museum is but it’s a fair height when you’re up there looking down at it.”

“The Air Ambulance is a charity and relies on donations to keep the service running - or flying, I should say - and there are a number of events that happen throughout the province."

Air Ambulance NI partners with the NI Ambulance Service and provides the HEMS for Northern Ireland.

In order to maintain the service, Air Ambulance NI must raise around £2 million per year, something Jason says requires constant attention.

“It costs about £2 million per year to keep the ambulance running,” he said.

Jason is also a paramedic for the Motorcycle Union of Ireland (MCUI) and has delivered critical care at a number of road racing events. It is something about which the Eglinton man is fiercely passionate about.

“Growing up, one thing that was always my passion has been road racing," he said. "I absolutely loved it and still do.
“In 2010, I walked away from a career in engineering and joined the Ambulance Service and once I was qualified as a paramedic an opportunity came up to join the medical team.

“It was a no brainer because I love motorbike racing, I love being a paramedic and this gave me a chance to combine the two.”
The Air Ambulance has come to be associated with road racing since the late John Hynes publicly advocated for its introduction and Jason says its impact since has been vital to the provision of critical care in Northern Ireland.

The 34 year-old: “Since the HEMS service came into Northern Ireland it has made a huge difference. It has increased the level of care and lessened the ‘postcode lottery’ effect of delivering critical care.”

To register for the abseil, visit the Air Ambulance website at www.airambulanceni.org or call the charity on 028 9262 2677.
Registration costs £40 and each participant is tasked with raising at least £55 to help the team continue
to provide this vital service.