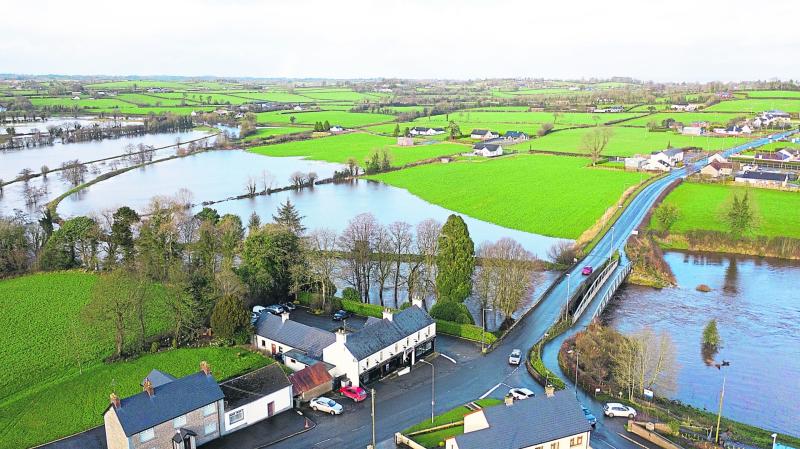 The view over Ballinderry Bridge as Storm Ciara swept through Co Derry over the weekend. Picture: John O'Neill/ Sperrin Photography

A number of roads were closed due to torrential rain on Saturday evening with a fallen telegraph poll blocking the Desertmartin Road outside Draperstown on Sunday.

The Mayogall Road, Gulladuff; Magherafelt Road, Moneymore; and the Tobermore Road, Magherafelt, all experienced serious flooding throughout the weekend.

Ballinderry was also badly hit after the river underneath Ballinderry Bridge burst it's banks. The aftermath was captured on via a drone by photographer John O'Neill.

On Saturday the PSNI issued a warning to only travel "if absolutely neccessary" after heavy rain fall made roads treacherous.
Rainfall

Approximately 50.8mm of rainfall was recorded during a 24-hour period at Lough Fea in the Sperrins. The average for the entire month of February is usually 83.5mm.

Severe weather warnings were put in place on Saturday, which moved to a yellow warning for wind and snow by Monday and today.

Another warning for snow and ice has been put in place for tomorrow, Wednesday.

While the local area was hit, the storm did not do as much damage as other parts of Ireland.

Gusts of up to 72 mph were recorded at Malin Head.

Up to 12,000 homes were left without power in the Republic after winds brought down power lines.

A major event to launch Galway's year as European City of Culture also had to be cancelled.

In advance of the storm, Derry City and Strabane District Council took the decision to close all its public parks and play parks.

Council-run cemteries were also closed for the weekend, although funerals were allowed to take place.

Activities throughout the city were also called off because of the weather.

Football fears
There had been fears that yesterday's National League GAA game between Derry and Tipperary at Celtic Park would have had to be called off as well. However, the game went ahead.

Communities Minister Deirdre Hargey announced at the weekend that an emergency fund had been set up to help any householders affected by the storm.

The Met Office said that the stormy weather is expected to continue today, but will start to ease off on Wednesday.

The Local Government Association said yesterday that council staff are working flat out round-the-clock repairing the damage caused by Storm Ciara, while making sure they are fully prepared for any further extreme weather.