“We are just gobsmacked at people’s generosity. But, that’s Limavady for you, all kind hearted people who look out for each other.” A relative of a family whose home was gutted by a fire. 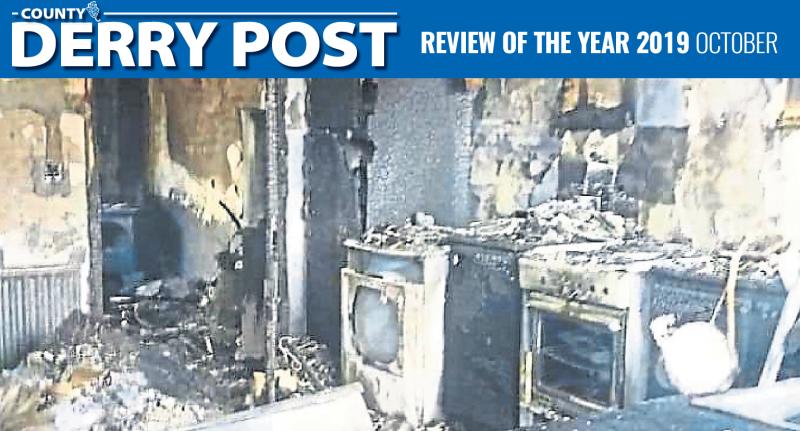 Fire leaves family homeless
A County Derry family were left homeless in October after a ferocious fire tore through their Limavady home.
However, the Ferris family from Glenmore Gardens in the east Derry town said they were ‘gobsmacked’ by the kindness of strangers who came to their aid.
Laura and Kieran Ferris and their three children were devastated when the fire effectively left them with nothing.
The blaze broke out minutes after Laura popped out to visit a neighbour. When it took hold the blaze was so intense that it gutted the home in a matter of minutes. The terrible incident followed on from Laura’s recent battle with breast cancer and the bad news was compounded further when the Housing Executive informed the family that no emergency accommodation was available in the area.
But after an online fundraising campaign almost £5,000 was gathered in a bid to help the beleaguered family.
Laura Ferris’ sister Maolisea McKee told the Derry Post: “We are just gobsmacked at people’s generosity. But, that’s Limavady to you, all kind hearted people who look out for each other. We can’t thank people enough.”

‘Our Superhero Michael’
At the start of October, the County Derry Post leads with a story of a brave boy who suffers from a rare medical condition.
Michael O’Kane was born with Tracheo-oesophageal fistula (TOF), a condition which prevents sufferers from swallowing and that affects one in every 3,500 babies born.
The Drumsurn lad had to undergo major surgery at just two days old and at one point doctors told his parents Suellen and Emmett ‘to prepare for the worst.’
However, after a month long battle in hospital, Michael was allowed to return home to Drumsurn.
Mum Suellen said she spoke to this newspaper in order raise awareness of TOF because Michael is still prone to episodes of choking – taking as many as five in a single day.
“There’s no cure for Michael’s condition. He is fixed but he will never be cured. This is a condition for life that he won’t grow out of but simply have to learn to live with,” she said.
As part of raising awareness of the condition a ‘Superhero Day’ was organised at St Matthew’s Primary School.
“I decided on the superhero theme because Michael is our superhero,” the proud mum added.

‘She would be so proud’ says winning GAA captain
The final front page of October’s County Derry Post saw the captain of O’Donovan Rossa GAC in Magherafelt take time to pay tribute to his late mother after the club won its first senior county title in 41 years.
A special segment in the speech of Daniel Heavron included a heartfelt epitaph for his mum Brigid who was a former assistant treasurer of the club and who was regarded as the ‘mammy’ of the Co Derry champions.
“I was praying to mammy that she would see it through,” Daniel said.
Mrs Heavron passed away in 2011 and the club’s youth officer, Enda Quinn, told the County Derry Post: “Brigid was a very valued member of our club and someone who is missed so much today. She would be so proud of everyone.”

‘A light in the lives of all who knew her’
Mourners at the funeral of an 11-year-old Magherafelt girl who died awaiting a heart transplant were told that more organ donors would be a ‘fitting legacy’ to the bravery of the schoolgirl.
Aimee Brady, a pupil at Spires Integrated Primary School died in hospital in October before a suitable heart donation became available for her. Archdeacon of Armagh, Canon Terry Scott urged those who had gathered at St Swithin’s Parish Church in the south Derry town that no other family had to endure the heartbreak the Brady family were now facing.
Rev Scott said: “Aimee was just 11-years-old. Yet, in her short life, despite all the challenges and difficulties, she touched so many and made a difference to the lives of so many others.
“She was a strong, brave and funny girl, full of life and spirit.”
In a statement, the Children’s Heartbeat Trust said: “Aimee was one of the bravest, funniest and sassiest girls. Always ready with a cheeky smile and joke, Aimee was a light in the lives of all who knew her and her impact has been felt further afield with well-wishers contacting her and her family from around the world.”

Over 1,200 people registered as homeless
Also, in October it emerged that more than 1,200 people were registered as homeless in Mid Ulster and Causeway Coast and Glens according to Northern Ireland Housing Executive (NIHE).
The annual NIHE bulletin which charts the rate of homelessness revealed that across Northern Ireland, 5,732 people were “statutorily homeless’.
Figures from the NIHE in response to a Freedom of Information request showed that 843 people presented as homeless in the Mid Ulster area and in the Causeway Coast and Glens area, 689 people were in the same position.
NIHE also said that hundred’s people were living in hostels or temporary accommodation in the Mid Ulster area while an exact figure of 114 was available for the Causeway Coast and Glens area.
The most common reasons for homelessness according to NIHE was the loss of rented accommodation, family disputes, neighbourhood harassment of financial hardship.