“About two years ago she said to me ‘mammy, I don’t want to get my hair cut anymore, because I want to give it to the children who lose their hair when they have cancer.” Martina Stephens on 10 year-old daughter Kellie donating her hair for cancer sufferers. 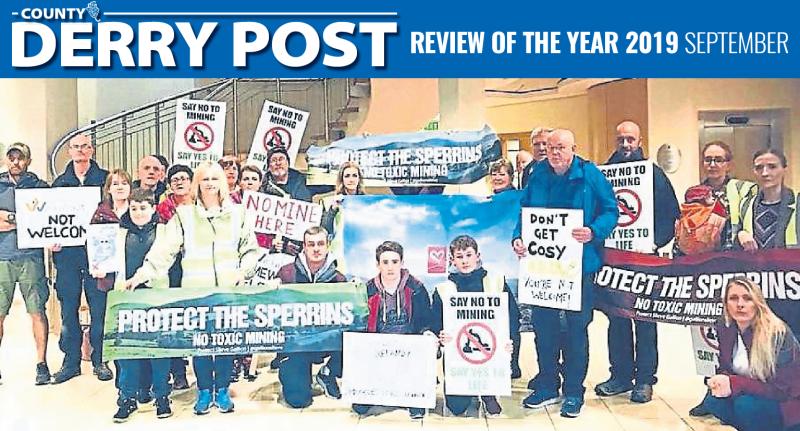 Protest group delighted at halting of Sperrin’s mining
Also, in September an anti-mining campaign group heralded a move by Mid Ulster District Council to block exploratory work in the south Derry district of the Sperrin Mountain range.
A meeting of the local authority’s Planning Committee saw political representatives block Shackleton Resources ambitions to commence borehole drilling close to the village of Lissan.
The result of the meeting was the withdrawal of development rights for the Australian owned company behind the proposed exploratory work.
However, the council directive had to be sent to the Department for Infrastructure (DfI) at Stormont for its consideration who have the power to overturn the council led decision.
But the campaign group ‘Love Screen Stop Mining’ were confident that the Mid Ulster District Council decision would be upheld.
Spokesperson for the group, Harry Hutchinson told the County Derry Post: “The decision at the planning meeting was unanimous, all councillors voted against and rejected it and we would be very surprised if the DfI overturned this.”
The campaign group also called on Shackleton Resources to completely withdraw their application for exploratory drilling in the mountain range.

Over 10,000 emergency food parcels given out
The County Derry Post revealed in September that in excess of 10,000 emergency food parcels were distributed by foodbanks in just two years.
Figures released by the Trussell Trust show the demand for three-day emergency food packages remained high at the foodbanks at Coleraine, in Foyle and at Magherafelt.
Between April 2017 and March 2018, 3,397 packages were given to adults across the county and 2,320 were given to children. And, between April 2018 and March 2019, 5,659 food parcels were given out.
A spokesperson for the Hope Magherafelt Foodbank told the County Derry Post: “We have found that we are feeding more families this year with benefit changes relating to Universal Credit, along with low income which both continue to be the main causes for crisis. The five-week wait for Universal Credit is just too long.”

10-year-old girl makes selfless donation to help young cancer sufferers
A very kind-hearted little girl from Drumsurn made a wonderful gesture in September to help seriously ill children.
Brave Kellie Stephens cut-off her Rapunzel like locks to allow wigs to be made for girls her own age suffering from cancer. The school child had 30cm of her beautiful blonde locks shorn to have the task completed.
The St Matthew’s Primary School pupil decided to take the task on two years ago after she learned about the Little Princess Trust charity. Wanting to help as much as possible she told her mum that she would grow her hair and then have it cut off to help those who need it more.
Kellie’s mum Martina said: “It was completely off her own bat, she just wanted to do it all herself. She is very, very brave.
“About two years ago she said to me ‘mammy, I don’t want to get my hair cut anymore, because I want to give it to the children who lose their hair when they have cancer.’
“To be honest I thought the notion would go off her and we never really talked about it again. Then a couple of months ago she said ‘mammy, I definitely want to do this, I’m nearly ready.’
“She grew it long and it’s lovely. She’s getting it cut off right up to a tight wee bob. She might even have enough hair for two wigs.”

Workers without jobs as travel giant collapses
Staff at a Co Derry branch of former travel industry giant Thomas Cook were left without jobs at the end of September when the firm collapsed.
It was believed that around six workers at the Magherafelt branch of Thomas Cook were informed they were jobless after the company ceased trading.
The Thomas Cook shop at Queen Street in the south Derry town had been operating for a number of years but a notice on the door said ‘This shop has been closed with immediate effect’.
The note also directed customers who made travel plans through the store to a dedicated UK Civil Aviation Authority (CAA) support service.

Loyalist victim says UFF mural is ‘hurtful and offensive’
In September, the lone survivor of an Ulster Freedom Fighters (UFF) attack in County Derry in the 1990s told the Derry Post that the reappearance of a version of an infamous loyalist mural in Derry city was both “hurtful and offensive.”
South Derry man Gerry McEldowney was left for dead at Castlerock in March 1993 when a loyalist murder gang attacked him and his workmates as they arrived at a building site in the picturesque east Derry seaside town.
But the re-emergence of a mural containing a skeletal figure dressed in a shabby military uniform wielding a sword in Derry’s loyalist Bonds Street area brought back dreadful memories for Mr McEldowney. The mural also contains the insignia of both the UFF and Ulster Defence Association and the words ‘Spirit of ‘93’, the year in which the Castlerock attack was followed in October by the IRA bombing of the Shankill Road in Belfast but also the notorious ‘Trick or Treat’ massacre at Greysteel. Loyalist killer Torrens Knight was later jailed for his part in the killings in both atrocities in County Derry.