“Deirdre wanted to donate her kidney but I was a bit concerned that she would encounter the same issues down the line, but she was adamant that she was going to do it.” Bernie McLaughlin on receiving a kidney from her daughter. 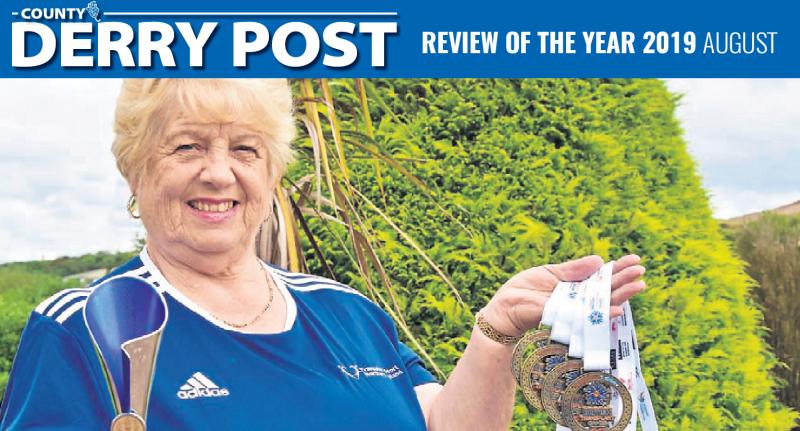 Air Ambulance NI tasked to nearly 200 local incidents
It emerged in August that Air Ambulance NI (AANI) had been tasked to almost 200 incidents in the local area in the two years since the service was created.
In total the service had attended in excess of 900 incidents across Northern Ireland which included 91 incidents in Mid Ulster and 97 throughout the Causeway Coast and Glens borough.
Kerry Anderson, Fundraising Manager for AANI thanked the public for their continued support.
“Each time the helicopter lifts off we are aware that someone is in great need and that thanks to the generosity of people locally, the team can offer the best chance of saving a life.”

Organ recipient urges others to become donors
A Foreglen woman urged others to get on the organ donors register after she received a life transforming kidney transplant.
Bernie McLaughlin was given a second chance of life after receiving a kidney from her daughter Deirdre Hone in 2011.
In August, Bernie showed off her haul of medals that she won at the British Transplant Games in Wales where she claimed four gold medals and two trophies.
“By the time I was in my late thirties, early forties, it had got to the stage where the tablets couldn’t control the blood pressure anymore.
“My GP sent me to Altnagelvin Hospital and after tests they discovered protein in my urine. I was then sent to the City Hospital in Belfast with kidney disease that can lead to kidney failure.”
“Deirdre wanted to donate her kidney but I was a bit concerned that she would encounter the same issues down the line, but she was adamant that she was going to do it,” Bernie told the County Derry Post.

Mid Ulster a ‘black spot’ for mental health services
August 2019 began with the County Derry Post reporting that the Mid Ulster district was a ‘black spot’ for accessing mental health counselling.
According to statistics uncovered by campaign group Participation and Pratice of Rights (PPR) just five referrals for counselling were accepted in the Magherafelt and Cookstown areas from a total of 2,000.
Elsewhere in Northern Ireland, the number treated in Ballymena and Antrim were 417 almost 1,000 people were successfully referred in the Larne, Carrickfergus and Newtonabbey areas.
The figures related to the period between April 2017 and March 2019.
Karen McGuigan from the Draperstown based suicide prevention organisation STEPS said she found the figures “deeply disturbing.”
“We know from our own experience as a community-based counselling provider that timely access to locally based, quality counselling can be life-saving for people in distress. Our experience is validated by research which shows that counselling offers an effective, low-cost form of treatment that can help to address mental pain and distress before these become acute, thereby ensuring that fewer people end up needing crisis care services.”

Former actor uses personal experience to help combat mental health issues
A former actor from Magherafelt told the County Derry Post at the end of August how she was using her personal experience to help others battle mental health difficulties.
Emma Kearney, who featured in many TV programmes, including Emmerdale spoke of the formation of her group ‘One More Light’.
“I was just sitting at the kitchen table one day checking the news on Facebook when I read about a person losing their life to suicide.”
After checking with Magherafelt Parish Centre the ex-actor booked a small room and held an information session in August 2018 and to her surprise over 150 people turned up.
“The group started with no vision, nothing, but I knew something had to happen. We began monthly meetings which I paid for myself, but then it started getting busier and busier.”
A donation of over £900 from local woman Eimhear Tohill after she ran the Belfast Marathon also helped.
“That girl has saved lives because of what she put herself through. She gave up three and half months to train for a marathon so that she could give money to a group of people who are trying to do something good for others.”