“On many occasions that meant he suffered vilification and violence for his convictions.” Mid Ulster SDLP MLA Patsy McGlone on late civil rights activist Ivan Cooper. 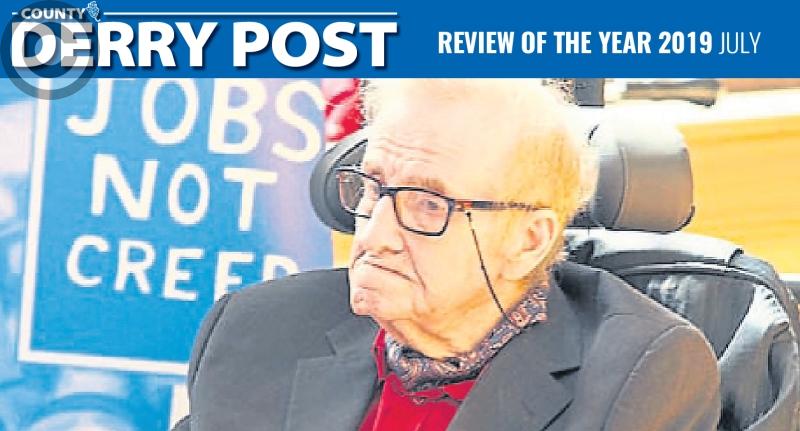 Passing of an icon of the civil rights movement
This month also saw the death of a founder and leader of the Northern Ireland civil rights movement.
Ivan Cooper, whose family roots were in Claudy passed away after a long period of illness.
Mourners at his funeral held at St Peter’s Church of Ireland in Derry included President of Ireland Michael D Higgins and many leading members of the SDLP past and present.
Mid Ulster MLA Patsy McGlone told the County Derry Post: “Ivan Cooper was a working-class Protestant man who saw a common injustice and inequality had taken root in Protestant and Catholic communities. He dedicated his life to fighting it. As an early leader in the Civil Rights movement, few have contributed as much to peace and equality on this island as Ivan.
“Organising marches in Derry for the right to a home, to a job and the right to vote, Ivan often put himself in the path of danger to secure justice for people in the community.
“On many occasions that meant he suffered vilification and violence for his convictions. Alongside his friend John Hume he helped blaze the trail that led to the Good Friday Agreement.
“Ivan’s unwavering belief that people on this island should come together to fight for common ideals in their common interest remains a lesson for us all.”

Elderly couple terrified by hate crime at Castledawson
An elderly couple were left terrified in July after a boulder was thrown the bedroom window of their home in broad daylight.
A note, containing the names of four individuals and a threatening message was attached to the rock used attack the pensioners home in Castledawson.
Gwen and John Stewart who are both in their 70s were left badly shaken and unable to sleep by the incident which police treated as a sectarian hate crime.
Former DUP MP for Mid Ulster, Rev William McCrea described the attack as “absolutely shocking.”
It also emerged that the couple were forced to flee their home in Bellaghy 20 years ago also because of sectarian hatred.
“This was not a child – it was someone with enough strength to hurl a boulder 16 foot from the front fence through a double-glazed window and then a further ten foot across a bedroom floor where it landed and cracked a wooden floor,” said Rev McCrea.

Shock following death of popular Kilrea GAC coach
July began with the County Derry Post reporting the sad passing of well-known and popular Kilrea GAA coach Brian Calvert.
Mr Calvert worked at Woodhall Education Centre in the east Derry town and was also a coach at Under 16 level for Padraig Pearse GAC.
After news that Mr Calvert, who was in his 50s, filtered through tributes flowed in.
SDLP MLA John Dallat described the late Mr Calvert as “inspirational.”
“He was an extraordinary person in every sense, a person who had accomplished so much in his life and much of it with young people,” Mr Dallat added.
And, Kilrea GAC senior coach Declan Bradley described Mr Calvert’s death as “truly heartbreaking.”
“Brian radiated positivity in everything he did and that rubbed off on many of the players we coached together over the years,” he added.
Kilrea GAC manager, Charlie Kielt also paid tribute to Brian Calvert.
“It’s a massive loss to our club and community. He was such an energetic and positive man that had an uplifting influence to all those in his company,” he said.

Air pollution data goes unpublished for more than 12 months
July 2019 ended with the County Derry Post leading with the story that air pollution data for Dungiven had not been published for over a year.
The last published data had shown the north Derry town had the highest levels of pollution in the area.
The issue has blighted Dungiven for many years because of the huge volume of traffic which traverses the town’s Main Street as a route from Derry to Belfast via the Glenshane Pass.
However, it emerged that the only air pollution monitor had been technically dysfunctional and as a result pollution data was not being captured.
The last known data captured prior to the discovery of the issue with the monitor was in June 2018.

Anger over offensive graffiti at Catholic church
Also, in July the County Derry Post reports public anger over the scrawling of sectarian graffiti on the wall of a church in east Derry.
Spray painted vandalism at St Anne’s Oratory in Kilrea laid out insults to the pope and caused outrage amongst parishioners.
Sinn Fein councillor Sean Bateson hit out at those behind the vandalism.
“First and foremost, this is a sectarian hate crime and those responsible should be brought to book. Parishioners and locals are incensed by this disgraceful graffiti attack on St Anne’s chapel, which is nothing more than blatant sectarian vandalism.
And, local SDLP representative Helena Dallat-O’Driscoll added her voice to the condemnation of the incident.
“This sacrilegious attack by three individuals wearing very distinctive tops should allow the PSNI to make quick arrests and bring charges for criminal damage and hate crimes.
“The individuals who have done this have probably blighted their own communities with messages of hate and it would be good to have them caught.
“In the meantime we will redouble our efforts to make sure this is not repeated and to ensure there is no retaliation because that would be in no one’s name and would only serve the perverted thoughts of those who did this,” she said.