“It’s a long run for such a young child but he trained hard and was so keen to raise money for two organisations that have done so much to help our family over the last few months.” Harry Smyth's mum Caroline on her 10 year-old son's charity run in memory of dad Peter. 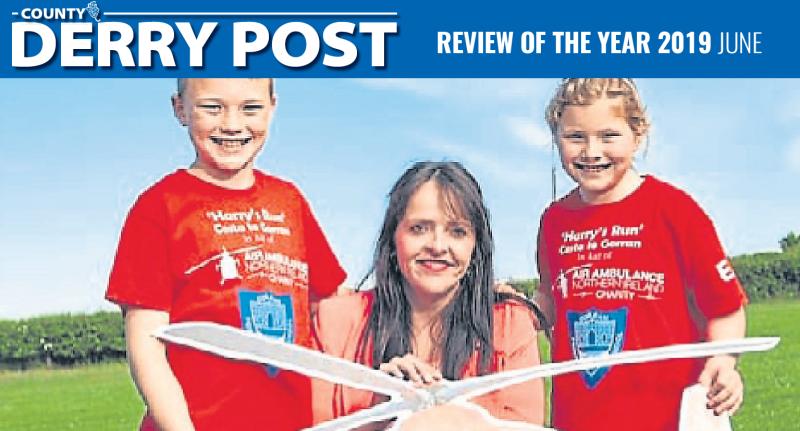 ‘Spiralling crisis’ prompts public meeting on mental health
In June, the County Derry Post reported that a mental health charity was prompted to a call a public meeting in response to the ‘spiralling mental health crisis.’
Mid-Ulster based charity SAM88 called the meeting to highlight the crisis in mental health service provision.
The organisation said that after conducting research that just two-thirds of GP practices provide access to counselling and the figure had dropped over the previous 12 months.
The charity added that a quarter of patients wait at least four months for an initial appointment with a counsellor in their GP practice.
Christine Rocks, whose daughter died by suicide said: “Access to counselling through GP practice is a vital treatment option for people with mental health problems of for those battling suicidal thoughts.
“But getting an appointment is a post code lottery. It totally depends on where you live.”

Return of All-Ireland Fleadh is possible in future
The return of the All-Ireland Fleadh to Co Derry is a future possibility the Derry Post reported in June.
Chair of the Co Derry Board of Comhaltas, Brendan Molloy said the return of the high point of the traditional Irish music scene could happen with full cross-sectoral support.
Fleadh Cheoil na hEireann was held in Derry City in 2013 during the City of Culture celebrations.
The city hosted the Co Derry Fleadh in 2019 and will do again in 2020 and that is being viewed as a platform to promote Derry’s chances of again hosting the All-Ireland event.

Mysterious sheep mutilation mentioned in book
The mysterious mutilation of hundreds of sheep in the last 25 years at a County Derry farm featured in a book published in June.
‘Circle of Deceit’: A Terrifying Alien Agenda in Ireland’ by Dermot Butler and Carl Nally focuses on unsolved crimes around the world.
The core of the work focuses on the McLaughlin farm near Feeny where hundreds of sheep have been mutilated since the 1990s. Gerard McLaughlin has lost around 600 sheep after their tongues were cut out during the night.
The authors claim the mutilations are a result of “cold and calculated attentions of a terchnologically advanced intelligence, for purposes unknown.”

Last bell rings at south Derry primary school
With the advent of the school holidays the gates at Culnady Primary School were closed for the final time.
Dwindling pupil numbers saw the school finally close as part of Education Authority plans that have earmarked 22 rural schools across the North for closure.
Chair of Mid-Ulster District Council, Martin Kearney told the Derry Post: “I want to acknowledge fully the role that Culnady school has played for years at the heart of the community.”
The closure saw Culnady join Bellarena Primary School in the east of the county on the list of rural schools that have disappeared from use.