“We had no vision of this accident coming as we were parked alongside the road and were hit with unbelievable force from the rear and then rammed into a wall. Camillus Bradley speaking after he and his sons survived a horror road smash 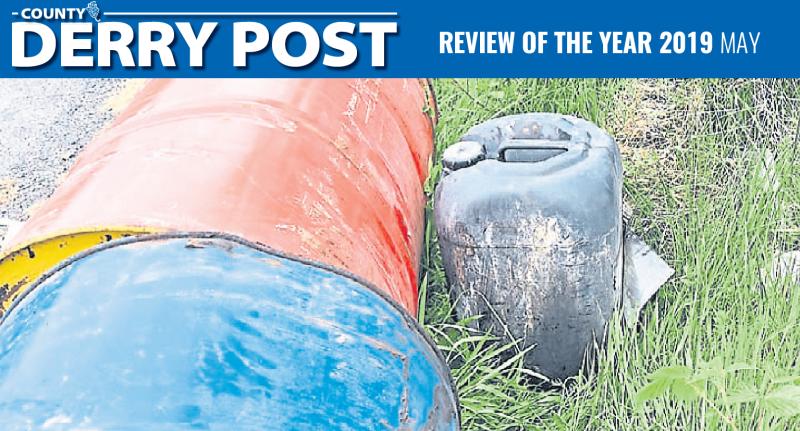 Lucky escape from horror road crash on Sixtowns Road
A father and his two sons were counting their blessings after their car was struck by an alleged drunk driver.
Camillus Bradley and sons Josh and Jordan were sitting in their car on Sixtowns Road close to St Columba’s Church in Straw when a Toyota Land Cruiser towing a trailer ploughed into the rear of their vehicle.
Police confirmed that the incident took place around 10.25pm on May 14. Two ambulance crews. NIFRS and the PSNI all attended the scene. The Bradley family members were ferried to Antrim Area Hospital whilst the driver of the Toyota was uninjured.
Camillus Bradley is a well-known figure in the world of motorsport said after the smash on social media: “Can’t believe this happened. Myself and my two sons Josh and Jordan are very lucky to have survived. My boys have life-changing injuries and I ask everyone to say a prayer for us.
“We had no vision of this accident coming as we were parked alongside the road and were hit with unbelievable force from the rear and then rammed into a wall.”
A man in his 20s was later arrested on suspicion of drunk driving.

Long serving firefighter sorely missed by family and colleagues
May saw the County Derry Post report on the death of firefighter David Brown who lost his life as the result of a road traffic accident.
Mr Brown was laid to rest in Polepatrick Cemetery Magherafelt after a service at Calvary Free Presbyterian Church.
The 54-year-old father-of-three suffered a heart attack whilst driving his motorcycle. A member of the Northern Ireland Fire and Rescue Service (NIFRS) for over 20 years, he spent the last seven years of his career as a crew commander.
Following his passing, Mr Brown’s colleagues paid a glowing tribute to the former Royal Marine.
A statement from NIFRS said: “We are deeply saddened by the tragic loss of our colleague, Crew Commander David Brown, who died in a road traffic collision whilst off-duty. Our sincerest sympathies are with David’s wife Geraldine, his daughters Laura and Emma, son Andrew and his colleagues at Magherafelt Fire Station where he was based.
“David joined NIFRS in November 1997. He served the community in Magherafelt for 22 years with distinction where he responded to incidents day and night. He will be sadly missed by his colleagues and across NIFRS.”
The PSNI in the district also offered their sympathies on the passing of Mr Brown.
A PSNI spokesperson said: “Over the years we have regularly worked alongside David at many incidents, he was a big part of the Blue Light Family.”

Valuable community assets lost
The manager of a vital voluntary service said the cost associated with an accident in which an alleged drunk driver careered into an Out and About Community Transport vehicle would have a detrimental impact on the service.
The incident took place in Bellaghy when a woman hit the bus with the car she was driving. Police said that a woman in her 40s was arrested later on suspicion on drink driving.
The incident took place in broad daylight on May 21.
Ashley Keane, manager of Out and About Community Transport in Magherafelt to the County Derry Post: “Due to the actions of the individual with total disregard for the law, two very valuable assets have been removed from our community – the driver and the minibus.
“In the midst of this staff and volunteers are working diligently to try and keep getting our members out and about, but obviously with one less highly skilled driver off the road it will bring challenges as we go forward.”

Suspected laundered fuel dumped at roadside
Anger was expressed in May after suspected laundered fuel was dumped along a country road.
Fuel launderers were blamed after two 45 gallon barrels and another five gallon container were abandoned at the side of the Cavanreagh Road close to Draperstown.
A spokesperson for Mid Ulster District Council said: “When investigated by Mid Ulster District Council, the material in the drums was found to be of a hazardous nature.”
Local residents who contacted the County Derry Post were angered by the dumping.
One said: “This just angers me that people think they can dump their rubbish in our counytryside.
Another person said: It’s obvious that fuel launderers are behind this and they have a blatant disregard for the health of people and for animals as this is very clearly toxic waste.”