“If it wasn’t for the Air Ambulance NI, I wouldn’t be here. They were able to provide me with pre-hospital emergency care at the scene.” Claudy farmer George Haslett who credits Air Ambulance NI for saving his life. 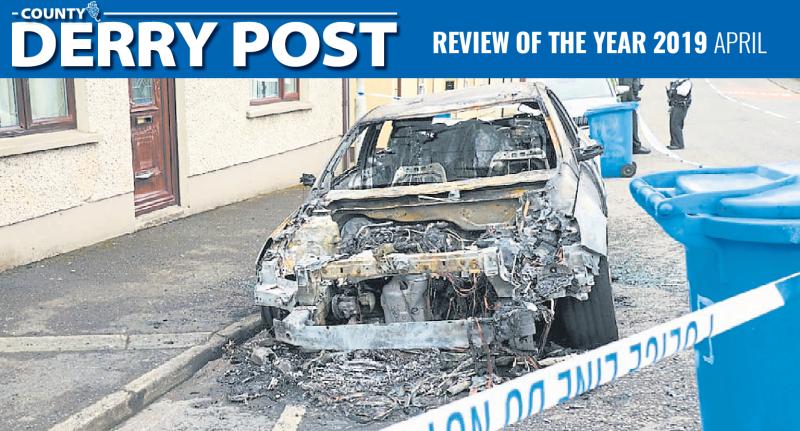 Election posters defaced in Limavady
Widespread condemnation followed the defacing of local authority election candidates’ posters in Limavady.
Posters for Sinn Fein Councillor Brenda Chivers and Aontu candidate Francie Brolly were scrawled with the slogans K.A.T (Kill All Taigs) and ‘IRA Out’.
Sinn Fein MLA Caoimhe Archibald said: “The vandalism of election posters is a criminal offence and a clear attempt to frustrate the democratic process and upset our campaign.”
Francie Brolly: “I will always show respect for other people’s opinions and views although I believe this act of vandalism was politically motivated.”

South Derry mum’s plea for kidney donation
A Draperstown mum told the Derry Post in April that her only hope of survival would be to receive a kidney from a live donor.
In 2018, Bronagh Murray (42) was given the devastating news that she required a kidney transplant just months after she received a liver transplant.
The mother began a dialysis treatment but was living in hope that a live donor could be found to ‘completely transform her life.’
“I had a liver transplant in March 2016 and after that I was in a wheelchair for a year. When I did get back walking again, I had to go for blood tests and results showed that damage had been caused to the kidneys. They found out that anti-rejection tablets, which I had been taking following the liver transplant had affected my kidneys.
“Tim Brown, my consultant at the City Hospital, said he has given every single person who walks through his door a chance but I’m the first patient he has made who he has hit a brick wall with,” she said.
Urging people to join the Organ Donor Register, the Draperstown woman added: “A few minutes is all it takes. No one knows when they, or someone close to them, will need an organ donor, so I think it’s very important to join.”

Family of five escape arson attack at their home
A couple and their three children were lucky to escape uninjured from an arson attack on their Moneymore home in April.
A car parked outside the house at Connyngham Street in the south Derry town was deliberately set alight around 3.30am in the morning. The vehicle was completely destroyed in the attack.
In a statement, the PSNI said they were attempting to establish a motive for the incident.
Sinn Fein representative, Councillor Darren Totten told the Derry Post: “Thankfully no one was injured in this incident, however I would ask anyone who has information to go to the police.”

‘Air Ambulance saved my life’ says Claudy farmer
A Claudy farmer who almost died in a work related accident in 2018 credited the Northern Ireland Air Ambulance service for saving him in April this year.
Gerorge Haslett was overcome by slurry fumes on the family farm and was left with a brain injury and unable to walk. However, after many months recovery he is walking again with the aid of a stick.
“If it wasn’t for the Air Ambulance NI, I wouldn’t be here. They were able to provide me with pre-hospital emergency care at the scene. Catherine Bell was the doctor that day and she was able to administer drugs and provide treatment that paramedics in an ordinary ambulance cannot do.”
In a gesture of thanks, George later organised a tractor run through the towns in his area and the proceeds raised from it all went to help fund the Air Ambulance NI.

Workers pulled off A6 roadworks because of security threat
Workers on the A6 dualling project running between Dungiven and Drumahoe were pulled off the site in April following concerns for their safety.
It was believed that workers on the £220 million project were told to down tools by their bosses following the alleged threat.
The incident came just days after a dumper truck was burned out at one part of the site on the Killunaught Road close to Dungiven.
After the workers left the site, all compounds along the route of the major construction project were locked up.
A spokesperson for the PSNI told the Derry Post that police had carried out enquiries following reports that a device had been left at a site on the Foreglen Road area of Dungiven.
And, Sinn Fein Councillor for the area, Sean McGlinchey said: “I would ask the people of Dungiven and surrounding areas to fully support the companies working on this project.
“The people of Dungiven have been waiting over 40 years for this bypass and do not want further delays like this.
“These workers should not be subjected to threats when going about their jobs.”