“The pain was awful, but I would do it all again in a heartbeat, if it meant I would get to see Freya again.” Erin O’Hara, whose little daughter Freya passed away just two minutes after being born. 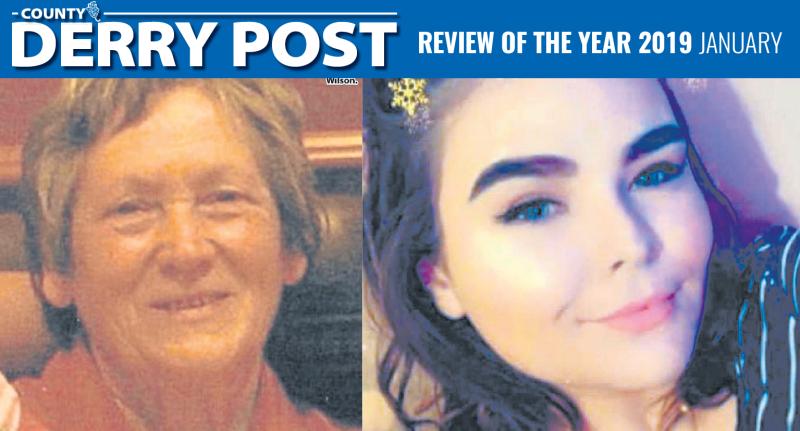 Anti-depressant pills dumped at roadside
The first edition of the County Derry Post in 2019, saw the paper lead with a how prescription drugs were discovered dumped amongst a raft of other rubbish on the Hass Road outside Dungiven – a spot which is highly popular with walkers.
The Fluoxetine tablets, used to treat depression, Obsessive Compulsive Disorder and bulimia have a range of dangerous side effects. A local Councillor said he believed the drugs were thrown out of a passing car.
Sinn Fein’s Sean McGlinchey told the County Derry Post he contacted the PSNI who removed the drugs.
“This road is very popular with walkers, particularly young families and a number of residents also live close by, so it was reckless to dump these tablets here.
“Regardless of what the situation is you don’t just dump medication at the side of the road. There is a proper procedure to dispose of drugs.
“There are bins at either end of this road and there is a state-of-the-art civic amenity close by, so there is no excuse to throw rubbish at the side of the road.
“We did a lot of work in schools recently in relation to fly-tipping to try and educate young people but those responsible have no regard for anyone,” he said.

Tributes pour in for teacher who was ‘loved by all’
The communities of Draperstown and Desertmartin were shocked and saddened in January to hear of the passing of beloved teacher Bridget Wilson.
Better known as Cassie, she was a central figure on the teaching staff of St Mary’s Primary School in Draperstown.
One of Cassie’s colleagues, former principal Matt Trolan told the Derry Post: “Cassie was a fantastic teacher. She had a genuine love for the children. She absolutely adored them and went over and beyond in her contribution to the school.”

Teenager fighting for her life in Manchester hospital
A teenager was left fighting for survival in January 2019 after falling prey to the deadly disorder sepsis.
19-year-old Rachel Kordula from Limavady was airlifted to a Manchester hospital in a bid to save her life. The beauty therapy student was found in an unresponsive state by her mum, Katrina Lynch on New Year’s Day.
It was at Altnagelvin Hospital that Miss Kordula’s family were told the devastating news that she was suffering from organ failure.
“Rachel had been out on New Year’s Eve and I didn’t check on her until one o’clock in the afternoon as I thought she was just tired from having a late night.
“When I found her, she was unconscious, she was blue and she wasn’t breathing properly. There were also signs of her having been sick,” mum Katrina said.

Opposition to goldmining gathers pace
Political momentum against goldmining in the Sperrins was growing in January.
Political representatives at both Causeway Coast and Glens Borough Council and Mid Ulster District Council voiced unanimous opposition to the plans to extract the precious metal from the famed mountain range spanning counties Derry and Tyrone.
Sinn Fein submitted motions of opposition to a total of four local authorities also including Derry City and Strabane District Council and Fermanagh and Omagh.
Mid Ulster representative, Councillor Ian Milne said the prospect of mining in the Sperrins would have serious consequences for people’s health and the environment.
“This motion calls on each of the councils to oppose these plans on the basis of serious health and environmental risks involved, not least the use of cyanide for mining purposes.”

‘Her hands will hold our hearts forever’
The final County Derry Post of January 2019 featured the heart-breaking story of the passing of a newly born baby girl.
Mother Erin O’Hara told this newspaper how her world came to an abrupt halt when she and her partner Jamie were given the news that their child would not survive after birth.
The young mum was told that her child had anencephaly, a condition where the brain and bones of the skull don’t form completely in the womb.
The life limiting condition has resulted in other women have terminations.
However, Erin decided against the advice and carried her child full-term.
Freya Anne O’Hara – McCormick was born on December 7, 2018 weighing just 2lbs 4ozs.
The chikld lived for just two minutes, but for her parents and her older brother, six-year-old Josh, those few seconds will be cherished forever.
Speaking to the Derry Post, Erin O’Hara said she would make the same decision ‘a hundred times over’ again.