A FAMILY owned supermarket chain has raised over £100,000 for a children's cancer charity. 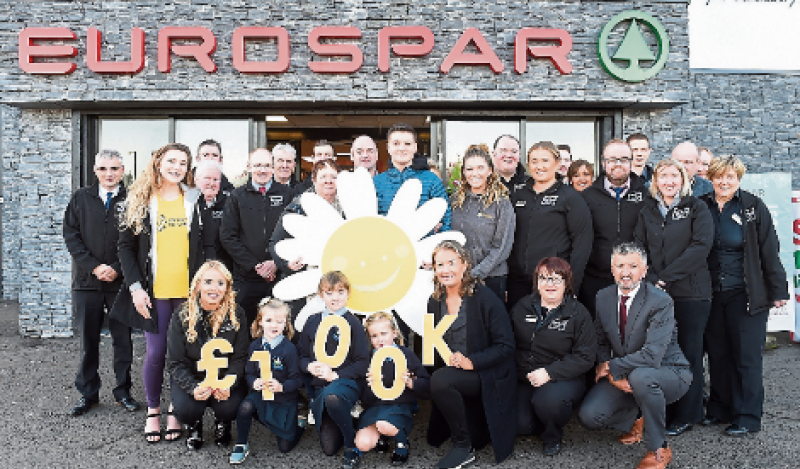 A FAMILY owned supermarket chain has raised over £100,000 for a children's cancer charity.
Kelly's Supermarkets, which owns ten SPAR, EUROSPAR, ViVO and ViVOXTRA stores in Mid-Ulster, raised the six figure sum for the Cancer Fund for Children.
Staff across the Kelly's owned stores raised a whopping £102,460 for the cause, close to the hearts of the staff and communities associated with the groups’ outlets.
The partnership with Cancer Fund for Children began in 2011 when Kelly’s staff  held bucket collections in their stores.
Seeing how much the cause resonated with staff and customers alike, the group decided to do more to try and make a larger donation to the charity.
Since 2011, they have organised charity walks, disco nights, and got behind EUROSPAR and ViVOXTRA initiatives such as the community coffee mornings and Christmas Parties, which help to raise much needed funds for the charity.
Members of the team have also taken part in Cancer Fund for Children-led trekking expeditions, scaling heights in Vietnam; The Grand Canyon and The Rockie Mountains.
More recently, the group organised a Charity Funday at The Jungle NI which was attended by customers, family and friends from each of the 10 stores. The day was packed full of family activities including tree-top jumps, zorbing and quad biking followed by an evening of entertainment by rising star, James Bradley and a barbecue, prepared by the group’s inhouse chefs.
The day itself raised £13,800 which when added to the total collected to date, helped surpass the £100,000 mark.
Lauryn Kelly, charity events organiser says the group is immensely proud of every member of the team who helped support the fundraising.
She said: “I have worked closely with Cancer Fund for Children for a number of years now.  “Taking part in the Grand Canyon Trek was a life changing trip for me as it helped me understand the extent this charity goes to to help and reach out to local families diagnosed with cancer.
“Seeing the life changing work carried out by Cancer Fund for Children inspired our team to take action and try to support their efforts as best we could.
“When we started this partnership 8 years ago, we had no idea how successful it would go on to be and I am so proud that we have raised over £102,460 for such a worthy cause.
“Of course, credit must go to all of our staff, customers, suppliers, friends and family who got behind us and supported us with their time and financial donations.
“Their generosity has encouraged us to continue to fundraise for Cancer Fund for Children and we hope our partnership lasts for many years to come.”
Staff at JC Stewarts in Magherafelt, also owned by the Kelly Group, have recently launched a Christmas Daisy Tree appeal which is the latest demonstration of the group’s support for Cancer Fund for Children.
Staff and shoppers alike are asked to donate Christmas presents, suitable for 12-18 year olds which will then be distributed among the network of families Cancer Fund for Children work with each year.
The idea began after a local family from Magherafelt saw that Kelly’s stores were supporting Cancer Fund for Children and wanted to become involved as they had benefitted directly from the charity.
Miranda Rogers, whose son Ozzie was diagnosed with cancer, said she was pleased to give back to a charity who had helped her family through a very difficult time.
“When Ozzie was diagnosed with cancer, our family’s life changed drastically but Cancer Fund for Children stepped in and helped us get through this difficult time. Being able to escape to Daisy Lodge for weekends and overnight stays was a very welcome respite for the whole family and the support we received from Helen, Ozzie’s Cancer Support Specialist provided by the charity, was invaluable.
“Helen was always there for Ozzie when he needed someone to talk to and she helped him overcome any fears or worries he had. Our whole family is so grateful to the team at Cancer Fund for Children for everything they have done for us, so when we saw that JC Stewarts were fundraising for them, we absolutely wanted to get involved and ensure other families affected by a cancer diagnosis could access the same levels of care and support.”
Lauryn Kelly added: “We know there are many other families living in the Mid-Ulster area who also receive support from Cancer Fund for Children so we are determined to raise even more money for this wonderful cause.
“Our stores are at the heart of their community and we are passionate about supporting local causes so I hope all our customers will continue to support us and donate to the Christmas Daisy Tree Appeal.”
For more information about Cancer Fund for Children and the support if offers to people affected by cancer, visit  www. cancerrfundforchildren.com