A FAMILY karate duo from Lavey have made history with their local club. 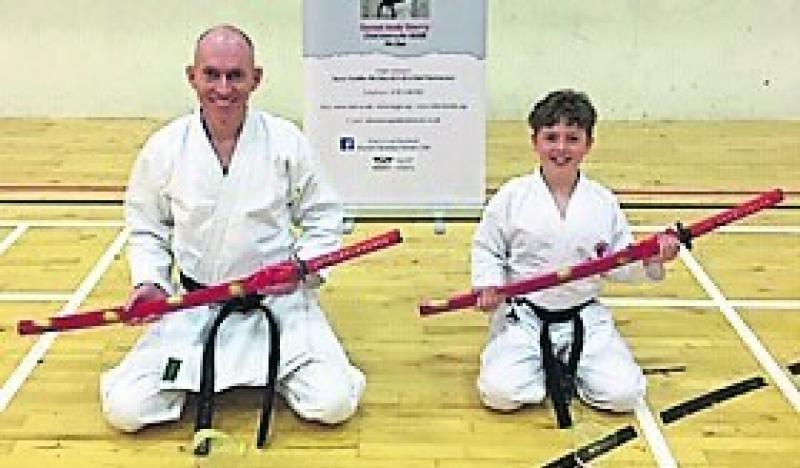 Dad John Broderick with son Pete (10) from Lavey who have both made history with their karate club by achieving Black Belts on the same day.

A FAMILY karate duo from Lavey have made history with their local club.
John and Pete Broderick, members of the Zanshin Shotokan Karate Club, have become the first father and son to obtain their Dan Black Belts on the same day.
The pair reached the huge milestone, a first for the Draperstown group, last month in Corduff, Dublin.
Both John (46) and Pete, who has just turned 10, have been training in the Zanshin Draperstown Dojo since 2016 and were some of the first people to join the newly opened club.
The club, run by Sensei Yasmin Geddis, is very proud of John and Pete on their achievement, and are pictured holding their authentic Samurai Swords which are awarded to those who gain their 1st Dans.
They also received a glass plaque gift from Zanshin to mark their Dan Grades.
To attempt your 1st Dan, not only do you need to be a dedicated member who trains in the weekly classes but also must attend specific courses to maintain a high standard of skills.
On Saturday, November 2, both John and Pete – then still nine years-old - participated in a gruelling 2-hour pre-grading training session under the instruction of two of the best UK Shotokan Karate Instructors - Sensei Sherry 9th Dan and Chief Instructor of the KUGB (Karate Union of Great Britain) along with Sensei Brennan 7th Dan, former World and European Double Champion.
Then the father and son duo went through a 3-hour long grading which comprised of Kata (structured and pre-planned movement), Kihon (basic movement) and Kumite (free sparring). They were among 40 others attempting to grade with four other members from the Zanshin Shotokan Karate Club and we are happy to report that all of our students passed along with Pete and John.
If you would like to find out more information about the Zanshin Shotokan Karate Club and its 23 other clubs you can find us on Facebook @ Zanshin Shotokan Karate Club /07931981962 or call down on a Wednesday night from 7pm – 8pm at the Workspace in Draperstown to take advantage of your first free session.