NEW speed warning signs have been introduced in a new community initiative spearheaded by a local Sinn Fein councillor. 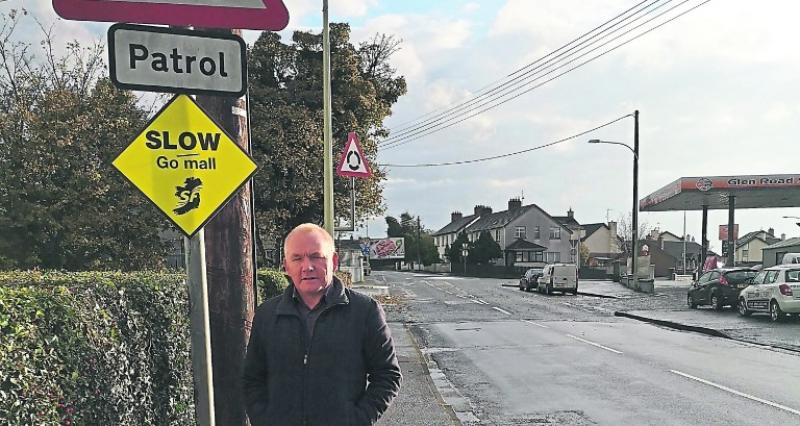 Cllr Brian McGuigan is pictured alongside one of the new Sinn Fein signs which aims to promote road safety.

NEW speed warning signs have been introduced in a new community initiative spearheaded by a local Sinn Fein councillor.
Mid Ulster representative Brian McGuigan and a Sinn Fein team organised for bi-lingual warnings to be erected on posts around schools and other busy areas in Maghera following concerns from the public.
Speaking to the County Derry Post, the local republican said: “The initiative to encourage drivers to curb their speed within Maghera and in particular around the vicinity of the local schools must be welcomed.
“I share their concerns that it’s important we get the message across to drivers that speeding can pose a significant risk to children, parents and staff particularly at school peak times”.
The Slow/Go Mall signs have been erected on various routes within the town and surrounding areas.
Cllr McGuigan, who is a member of the Policing and Community Safety Partnerships (PCSP) within Mid Ulster District Council, added: “I’ve recently met with residents from the Glen Road area of Maghera who are angry and concerned with excess speeding that I have raised this with the PCSP manager as a matter of urgency.
“The built-up area of the Glen Road is relatively straight which can make some motorists think it is safe to drive at increased speeds. However, it is also a road where a lot of pedestrians cross – many of whom are walkers, residents and young people going to and from the local schools.
“I am encouraging drivers to take a moment and think of the potential consequences of driving too fast. A split-second delay in reaction time could make a huge difference and I hope the initiative taken by Maghera Sinn Féin will make a difference and encourage motorists to think twice about their speed.
“I am delighted to support this road safety awareness and hope it will have an impact in making the roads safer - the most important thing is the safety of all who live in the local area.
“Hopefully, through this campaign we will help reduce speed and make the area a safer place for all”.