A DRAPERSTOWN woman has been recognised for her contribution to a mental health charity in her community. 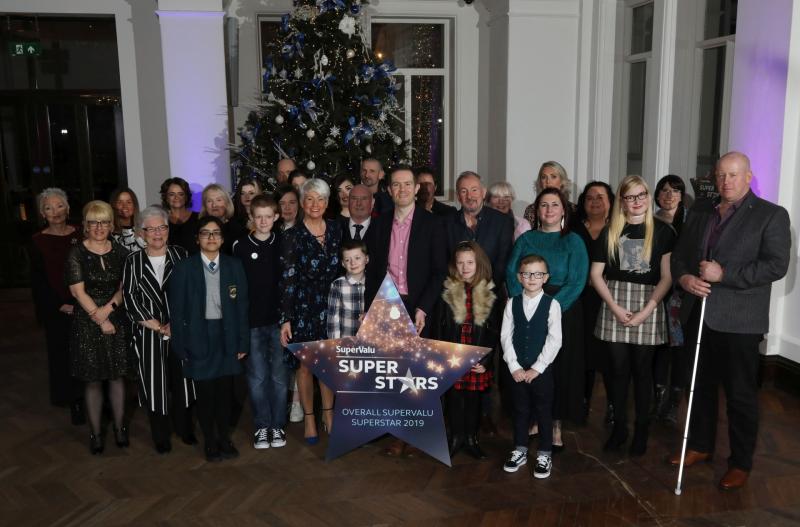 Winners and finalists of the 2019 SuperStars awards.

A DRAPERSTOWN woman has been recognised for her contribution to a mental health charity in her community.
Karen McGuigan was awarded in the annual SuperValu SuperStars Awards in the Community Group SuperStar category for her contribution to mental health charity, STEPS.
She was one of six local heroes who were recognised at the third annual SuperValu SuperStars Awards.
The popular initiative recognises those who had gone beyond the call of duty to help people and communities in need. Almost 30 local heroes were shortlisted within the categories of Young SuperStar, Fundraising SuperStar, Unsung SuperStar, Community Group SuperStar and Social Enterprise SuperStar.
Each finalist was awarded with SuperValu vouchers for their individual efforts.
From life-savers to inspiring caregivers, volunteers, community activists and fantastic fundraisers, the shortlist shone the spotlight on the people that have gone above and beyond to make a difference in communities across Northern Ireland.
The dazzling SuperValu SuperStars finalists’ ceremony was hosted by TV personality Pamela Ballantine at Titanic Hotel on Thursday, November 21.
Three local heroes from Co Derry were recognised in the Fundraising SuperStar category.
Greg McLaughlin from Claudy was recognised for his efforts in supporting local charities; Foyle Hospice and Children In Crossfire through organising a charity barn dance, raising over £30,000.
Emma Graham from Coleraine was recognised for dedicating her time as a dance teacher for ‘Strictly’ fundraising events in the community, has raised £30,000 in this year alone.
Terry Geddis, also from Coleraine, was further recognised in this category for organising a series of cycling fundraisers in memory of his late son, Zachary Geddis, who was lost to suicide in 2017.
Further local heroes recognised at the ceremony included Willie Lowry from Limavady. Willie was recognised in the Unsung SuperStar category for his dedication to the running of the Titans Kickboxing Club in Limavady over the past 20 years.
Gouri Riya Chugh from Derry City was recognised for demonstrating community spirit in fostering cultural diversity, tackling racism and enhancing civic pride within the local Indian community.