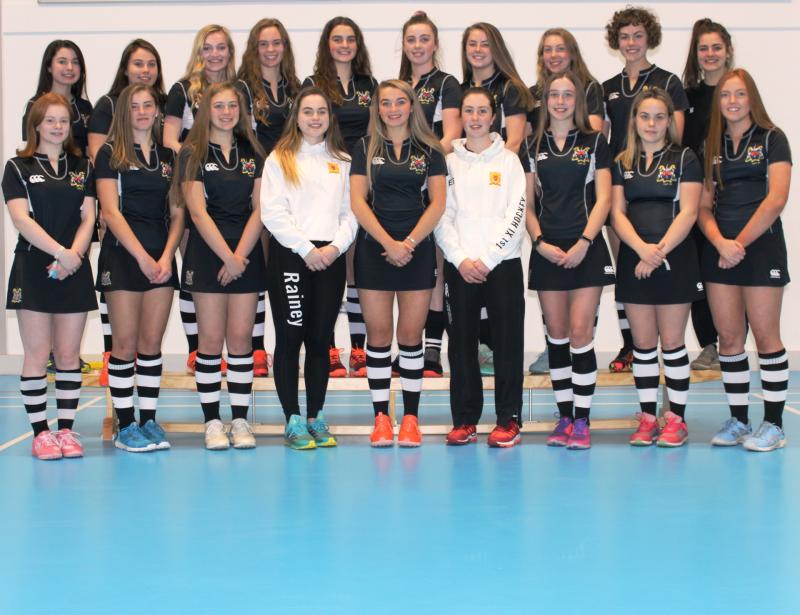 The Rainey girls’ first XI hockey team head into Wednesday’s clash with Banbridge Academy at Stormon on the back of a 100 percent record.

The Magherafelt girls won their league group with victories over Coleraine Grammar School (7-0), Glenlola Collegiate (4-0), Dalriada (1-0) and Ballymena Academy (4-0) to top their Superleague section and reach the quarter-final.

This proved to be a very tough match with the Rainey girls played a fast-competitive match to go 2-0 up early on through Gabi Scott and Alexa Hastings, against a very strong Armagh Team. But just on half-time Armagh pulled one back to make it 2-1.

The second-half continued to be played end to end but it was Armagh who eventually found the back of the net to pull the match back to a draw.

The teams then faced a shoot out of 1v1’s to decide the winner.  There were some fine saves from goalkeeper Dawn Francis and goals from Charlotte Beggs, Ellie Montgomery and Gabi Scott to ensure a 3-2 win to Rainey on penalty runs.

The Rainey girls then progressed to the semi-final at Civil Service HC on the 16 November against Strathearn School.

Strathearn started well and dominated much of the play but the Rainey girls were patient and played themselves into the game. Ellie Stewart scored a great goal late in the first quarter which saw the Rainey girls grow in confidence and start to take control of the game.

A penalty stroke clinically finished by Captain, Ellie Montgomery, and a fine individual goal from Charlotte Beggs brought the score to 3-0 just on half-time.

The Rainey kept the pressure up in the second-half and another great goal saw Gabi Scott put the girls 4-0 up and guaranteed their place in the final.

“Really well done to the whole squad and many thanks to all the friends, family and staff for support,” commented Carolyn Burns.