NORTH Coast Integrated College (NCIC) was proud to present its production of ‘The Wizard of Oz’ on November 14 and 15 to packed out audiences. 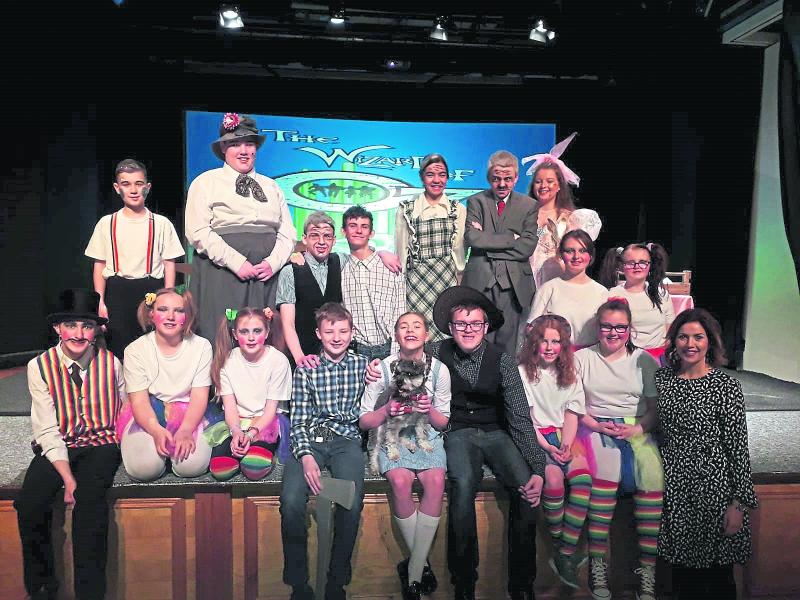 The cast of 'The Wizard of Oz' at NCIC with Eimear Hughes, Show Director and Head of Drama.

NORTH Coast Integrated College (NCIC) was proud to present its production of ‘The Wizard of Oz’ on November 14 and 15 to packed out audiences.
Guests from local primary schools and other community groups were amongst those wowed by the quality performances during two separate matinee shows.
Eimear Hughes, Head of Drama at NCIC, was in charge of directing the stellar cast, including her very own adorable pooch, Murphy as Toto.
Mrs Hamill, Head of Music, was responsible for the amazing musical score.
The principal players were supported by the talented chorus which was made up of pupils from North Coast Integrated College, Harpur’s Hill Primary School and Ballysally Primary School, all of whom made very convincing munchkins!
Cast as leading lady Dorothy, was year 10 pupil Lucy Mackey.
A dream come true for Lucy who said: “When I auditioned, I was nervous because it has actually been one of my dream roles. I have loved every single second of being Dorothy”.
The trio of leading men was played by year 9 pupil, Tommy Capper as Tin Man and GCSE Performing Arts pupils, Alex Bradley and Orrin Glendinning as Scarecrow and Lion respectively. Another GCSE Performing Arts student, Cameron Kane took up the role of Professor Marvel.
All actors were very excited for the performances and hoped all would go well and go well it certainly did!
The struggle between good and evil was the task of year 9 pupil Sarah Leslie, as the Wicked Witch and her classmate Sarah Rice as Glinda. The roles of Auntie Em and Uncle Henry were played by Shaolin Henry and Peter Hynds, respectfully.
The show was such a success, not just due to the talented cast but also to the hard work of many different people behind the scenes from costume, make-up and hair to lighting and sound.
Over the two nights NCIC transported its audience to Kansas and Oz and back again.
Dorothy knew there was no place like home and in Coleraine, there’s no place like North Coast Integrated College.
What talent. What community spirit. What showmanship!