A Co Derry student has spoken of how she helped evacuate dozens of people from a burning six-storey building. 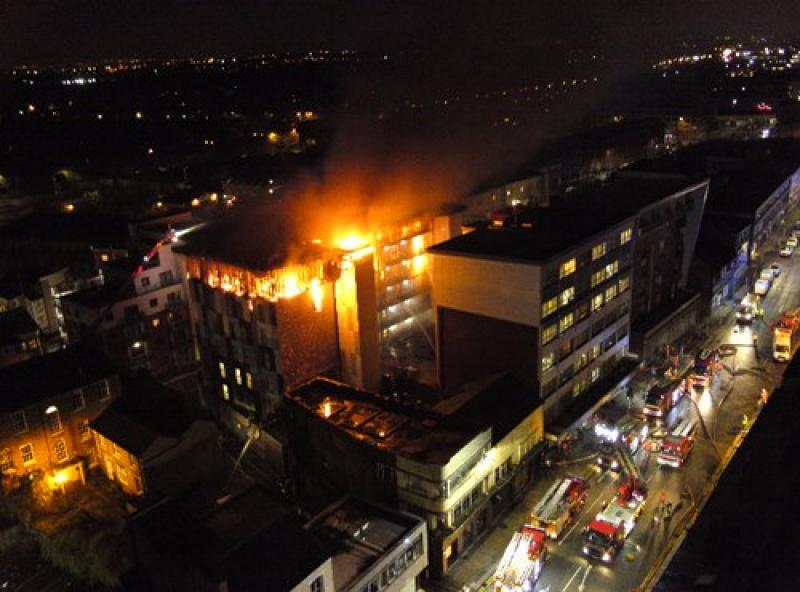 A picture captured by Greater Manchester Police of the blaze in Bolton.

A Co Derry student has spoken of how she helped evacuate dozens of people from a burning six-storey building.
Kate Farren, 21, from Ballykelly knocked on doors to alert fellow students to the blaze as it began to take a grip on The Cube building in Bolton at around 8.30pm on Friday. Two people suffered minor injuries in the fire.
The third-year student says her training as a student warden kicked in when she became aware from a friend there was a fire in the building.
Kate, her friend and another student warden took it upon themselves to go door to door to alert students.
“As soon as she said there was a fire I just ran out and hit the fire alarm to let security know and then started evacuating people floor by floor. I then waited for the fire bridge to let them know where to go. I just kept evacuating people.”
Kate's room was on the sixth floor and in the following minutes she went to more than 70 doors over the six floors helping in the evacuation of more than 100 people.
“I just did what my fire training had trained me to do,” she said.
“It is all a bit of a blur but as I was leaving the building the fire had reached the sixth floor and the roof was starting to catch fire.
“It was just adrenalin. It didn’t hit until I rang my mummy and daddy after.”
The Bolton University student and her fellow student warden were praised for their actions by the Mayor of Greater Manchester Andy Burham.
Kate has been left without possessions after her room was destroyed.
“I’m just having the realisation of everything now. It could have been a lot worse.”
She is currently staying in a hotel until more permanent accommodation can be organised.
Kate paid tribute to the work of the university, emergency services and the generosity of people who have supported students since the fire.
More than £10,000 has been raised for the University of Bolton students through a crowdfunding appeal.
At its height, about 200 firefighters from 40 fire engines were tackling the Bolton blaze.
Greater Manchester Fire and Rescue Service (GMFRS) said two people were treated by paramedics at the scene.