SHOCKING CCTV footage shows masked men torching a car and smashing the windows of a home in a Co Derry village in the middle of the night. 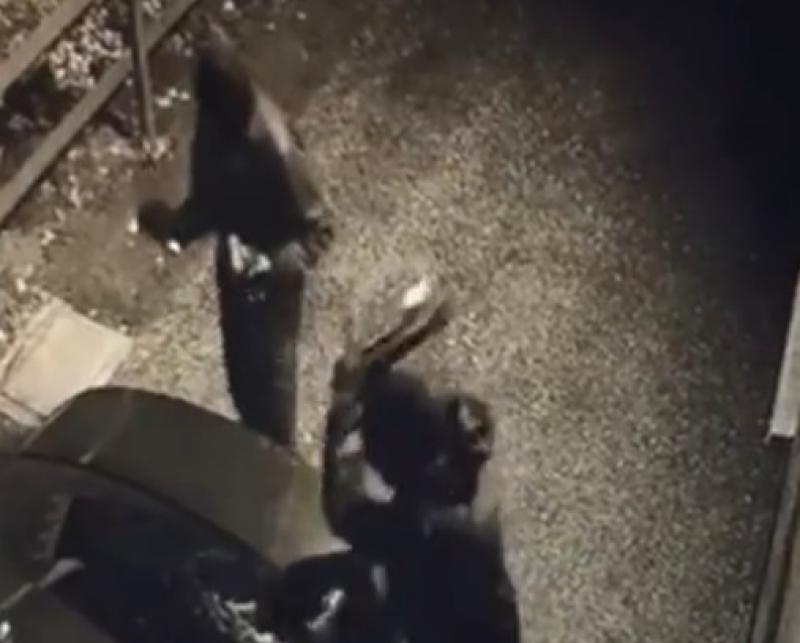 CCTV footage of the attack

SHOCKING CCTV footage shows masked men torching a car and smashing the windows of a home in a Co Derry village in the middle of the night.
Police are investigating the sinister incident which took place in the Hazel Grove area of Tobermore during the early hours of Saturday morning.
The CCTV footage shows two masked men getting out of a VW Passat estate car before smashing the windows of an Audi A6 car parked outside a house.
One of the attackers pours a liquid through the rear window before attempting to set fire to the car.
The other man is seen in the clip smashing the windows of the house.
The two attackers returned to successfully set the car alight before fleeing in a getaway car which was later found burnt out at Lisnamuck Road in Maghera.
The victim of the attack is said to be a "well respected member" of a local football club.

In a statement to the County Derry Post, Upperlands Football Club issued an appeal for information and said it was one of its members who had been targeted in the "random" attack.
The club said: "We are appealing for information following a random attack on one of our esteem and well respected member in the early hours of Saturday morning on 16/11/2019.
"Anyone with information is asked to contact police, or if you do not want to contact the police directly please forward any information to DUP, UUP, any politicians or myself (through the football club)."
The club also posted the appeal and footage on social media.
The attack was last night condemned by local representatives.
DUP Mid Ulster MLA Keith Buchanan said: "This type of behaviour is totally unacceptable and I would urge anyone with information to pass it on to the PSNI.
Mid Ulster District councillor Anne Forde also strongly condemned the incident.
"When people are out and about looking forward to Christmas it's disappointing that this has happened,” she said.
The PSNI confirmed it has launched an investigation.
PSNI Sergeant Young said: “Shortly after 1.10am, it was reported that an Audi A6 parked in the area was set alight.
"One man armed with a hammer damaged the rear window of the vehicle and another man poured a substance into the car before the car was set alight.
“It was also reported that windows of a property in the area were also smashed during the incident.
“The two men are described as wearing dark clothing and balaclavas.
"The men are believed to have made off in a VW Passat following the incident.
“Enquiries are continuing and we were appealing for information in relation to this incident to contact police on 101, quoting reference number 92 16/11/19.
"Alternatively, information can also be provided to the independent charity Crimestoppers on 0800 555 111 which is 100% anonymously and gives people the power to speak up and stop crime.”