AN artist who started her career in the attic of her Feeny home has scooped a prestigious music award. 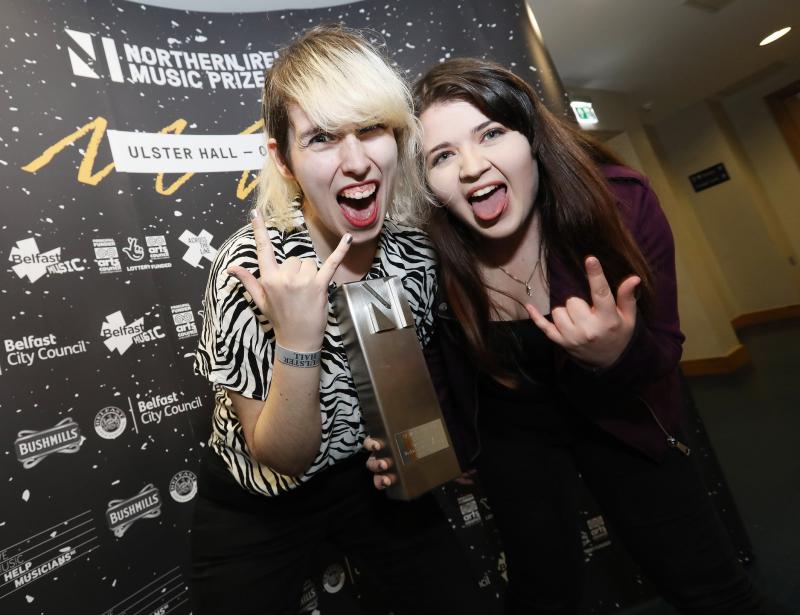 AN artist who started her career in the attic of her Feeny home has scooped a prestigious music award.
Shannon O'Neill's Sister Ghost band picked up the Best Live Act award at last week's NI Music Awards.
She was one of a handful of talented recording artists and muscians to be honoured at the Ulster Hall ceremony where music royalty Snow Patrol played a live set.
Speaking to the County Derry Post yesterday, Shannone said it was “an absolute dream” to take home the accolade.
“Every gig we'd ever played had led up to that moment, from the first gig I ever played at age 12 in the Dungiven GAA clubhouse to standing on the famous Ulster Hall stage where so many of my heroes have performed,” she said.
“My bandmates and I just want to thank everyone from back home who voted and to the County Derry Post for their support.
“I am so proud to be from County Derry and to be in the Best Live band in Northern Ireland is such an amazing honour, I can't wait to see what the future holds for us.
“More good gigs anywhere and everywhere. That's what it's all about - putting on a good show!"
Sister Ghost has gone from strength to strength since Shannon started the project from the small beginnings of her attic in her rural home in 2014.
In the years leading up to this momentous and hard earned win, they have played shows across the UK and Ireland, Berlin and California, garnering support slots with Pussy Riot, Le Butcherettes and Shellac along the way.
This win will surely see them playing bigger shows and travelling further afield.
Recently the band released their latest single 'Fake Friends Run This Country', a fast-paced, two-minute punk blitz taking aim at oppressive and corrupt political systems across the world, on 21st October; a timely release on the day that same sex marriage legislation and the decriminalisation of abortion came into law in Northern Ireland.
I have attached photos from the event and the moment that Shannon and Maeve from the band received the coveted award, presented by last years winner Paul Connolly from the Wood Burning Savages and a representative from Bushmills Irish Whiskey, who sponsored the Best Live Act category.
The band will support the arena-friendly Ryan McMullan as part of the headline event of the Atlantic Sessions Festival in the 1200 capacity Kellys Portush venue, on Saturday 16th November. In January they will join Kerrang! favourites Petrol Girls as Irish support for their Belfast, Dublin and Limerick shows.
For more information on gigs visit the band's webiste sisterghost.com