A TALENTED young carpenter from Garvagh will represent Northern Regional College in Birmingham next week at the prestigious WorldSkills UK LIVE finals – the ‘Olympics of vocational skills’. 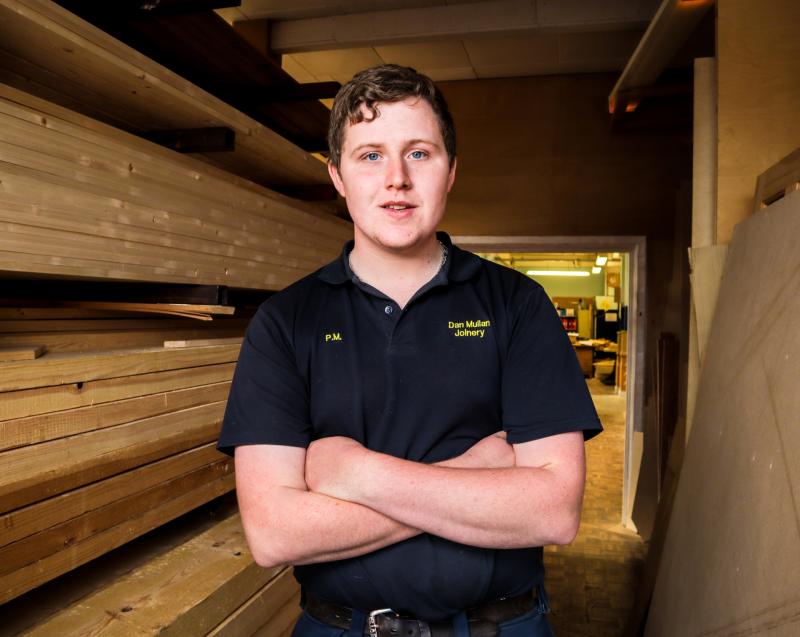 A TALENTED young carpenter from Garvagh will represent Northern Regional College in Birmingham next week at the prestigious WorldSkills UK LIVE finals – the ‘Olympics of vocational skills’.
Patrick McCloskey, a Level 3 apprentice carpenter at the College’s campus in Coleraine, fought off stiff competition in a series of inter-campus and regional qualifiers to secure his place at the national finals which take place from 21 – 23 November at the NEC, Birmingham. The finals are at the heart of WorldSkills UK LIVE, the UK’s largest skills, apprenticeship and careers event.
Over the three days there will be competitions in 70 different skills across the Digital, Technology, Engineering, Construction and Hospitality industries with finalists having to a set task or series of tasks in their respective skill area within a limited time and front of the 70,000 plus visitors attending the event. The original entry of over 3,000 has been whittled down to just 500 for the national finals and Patrick is one of the Northern Regional College competitors to make the cut.
The other finalists accompanying him from across the College’s six campuses, are: Abigail Reilly, Ballymena (Plumbing); Jack Marshall, Newtownabbey, (Web Design); Ashton Logan, Ballymena (Bricklaying); Tadas Dobrovlskis, Newtownabbey (Welding); Philip Park, Ballymoney (Graphic Design); and Maciej Twardowski, Magherafelt (IT Software Solutions for Business).
Patrick is hoping to follow in the footsteps of his carpentry classmate Samuel Gilmore who won a gold medal and was named UK Champion at last year’s LIVE finals. Samuel has since gone on to be crowned Europe’s Best Apprentice at the European Alliance for Apprenticeship Awards, held in Helsinki in October.
Despite the pressure, Patrick is feeling optimistic about the opportunity:
“I am really excited to compete at WorldSkills UK and see how I fair against some of the best carpenters in the UK. I will have a total of 18 hours across three days to build something and demonstrate to an expert panel of judges my speed and accuracy whilst working.”
Commenting on his preparations for the event, he said: “Lecturers and students from the College who have previously competed at this level have been able to provide me with some hints and tips about what to expect. I have been preparing as much as possible with my tutor Ian Forsythe and I have found his support and expertise to be a huge help and source of confidence for me. Ian went to the national finals with Samuel last year, so he has a strong insight into what the judges are looking for.”
As part of his apprenticeship, Patrick is employed by Dan Mullan Joinery in Glenullin. He spends one day each week in College and other four on site with his employer.
“Dan has taught me a lot and I have gained worthwhile experience from working with him which will stand me in very good stead for the competition,” Patrick explained.
Congratulating Patrick and all the students on reaching the national finals, Professor Terri Scott, Principal and Chief Executive of Northern Regional College said:
“These students are shining examples of the skills and talent inherent to our young people at the College. What they have achieved so far is a reflection of their hard work, commitment and dedication and I wish them every success in the national finals.”
She said the students and their lecturers all deserved great credit as qualifying for WorldSkills UK LIVE was a major achievement:
“I can’t impress the scale and scope of the finals enough – they really are the equivalent of the Olympics for experiential learning and apprenticeships. It is a true delight to see so many from the College compete at such a high level.
“Many students recognise that the traditional academic pathway is not for them, so they choose an alternative route to success and pursue a pathway in a trade-based career through an apprenticeship, Higher Level Apprenticeship or one of the other training opportunities available at the College. These students are testament to the high level of success that can be achieved in any subject when their hard work is fostered in a caring, encouraging and supportive environment,” Professor Scott said.
Dr Neil Bentley-Gockmann OBE, Chief Executive, WorldSkills UK said: “I wish all Northern Regional College students the best of luck as they compete at WorldSkills UK LIVE.
“At WorldSkills UK we work to accelerate the development of young people’s skills from national to world-class standards. We’re creating a new generation of high flyers that give UK employers a competitive edge.”