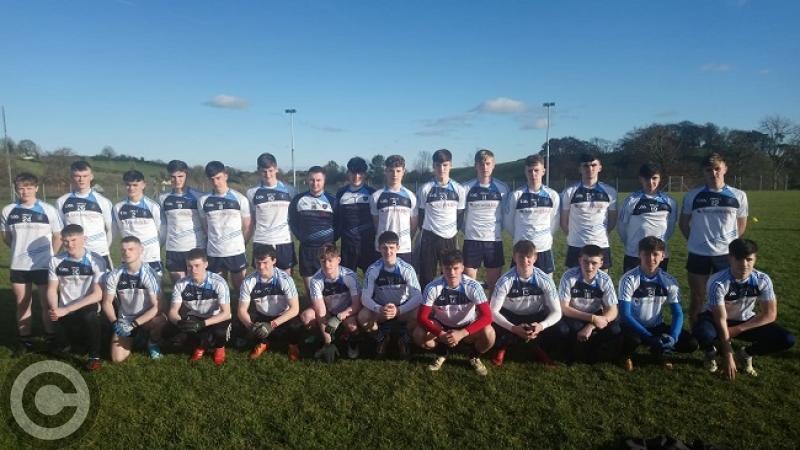 The St Mary's Magherafelt pictured before Friday's defeat against Armagh

St Mary’s Magherafelt were left to rue a wasteful first-half after going down to Armagh in their opening MacRory Cup group game at Donaghmore on Friday.

The ‘Convent’ hit nine first-half wides and continued to take the wrong option in possession against an efficient Armagh outfit who didn’t register a wide in the opening half and hit only two in all.

Mattie McGleenan’s side were 0-6 to 0-1 ahead at the break and when they rattled off another four unanswered four points in a ruthless third quarter, a hammering was on the cards.

They rarely squandered possession and in James Walsh at wing-forward they had a player who had everything. He won possession, caught kick-outs, linked the played and kicked four points from play.

Goals from Dan Higgins and Sean Duffin helped Magherafelt get back on level terms with 53 minutes on the clock but it was Armagh who finished with a flourish. Magherafelt didn’t helped their own case but turning over cheap possession and with a measured attacking unit and a late penalty Armagh ran out five point winners.

Magherafelt had former All-Ireland winner Johnny McGurk as part of their management team of Kevin Brady and Ronan Devlin after Lavey man’s recent appointment as the school’s GAA Development Officer.

They had to start without Eunan McElhennon following a knee injury sustained in a warm-up game with St Patrick’s Maghera but the Desertmartin flier is expected back later in the competition.

While their comeback was in vain, the performance will give the 2017 champions plenty to chew over as they prepare for furthers game against Omagh CBS and St Ronan’s Lurgan.

Magherafelt started with Dan Higgins and Johnny McErlain at midfield. Aidan McCluskey played at centre back with Ronan McKenna playing as a sweeper, allowing Lennox Camara to do likewise for Armagh.

With a lack of movement up front and brilliant defending from Armagh corner back Oliver Guy, Magherafelt found the going tough in the early exchanges.

The green jerseys swarmed them and played patient, possession football out of defence. Kevin Robinson played a pass to James Walsh for a sweet opening score which was a sign of things to come.

Magherafelt enjoyed almost five minutes of dominance but had nothing to show for it. Within a minute Armagh fired over two quick-fire points from Mark McKeever and midfielder Steve Donaghy

After using all his skills of evasion, James Walsh cut across Eoin McEvoy’s run and kick a wonder score to open a four point gap. Armagh heaped on the pain with scores from McKeever and Sean Quigley.

Fionn Diamond played on the front foot and kept trying to push Magherafelt forward but it wasn’t until the 25th minute that they registered a score. Higgins’ shot came down off the post and with a goal chance on, Callum Ormsby kicked over the bar.

At the other end, Magherafelt needed a brilliant save by Peter McKinney to deny McKeever from close range, staying on his feet until the last minute to cut down the Armagh man’s angle.

Armagh introduced Ryan Bradley at half-time and he had an instant influence. He played in Kevin Robinson for a point, kicked one himself from a narrow angle but along Walsh effort was the pick of the scores.

Magherafelt trailed 0-10 to 0-1 after 39 minute and it was Terry Devlin who grabbed their second score from a free when Dan Higgins was fouled after picking up Eoin McEvoy’s pass.

In the 42nd minute the Derry side were given a lifeline. Johnny McErlain ran at the Armagh defence, Callum Ormsby was involved and at the back post it was Sean Duffin who palmed home.

Still Armagh kept in control but when Shea McSorley caught a kick-out, linked with Devlin and Duffin before taking the run and kicking over, it game the ‘Convent’ a boost.

They almost found the net when McErlain picked out Aidan McCluskey but goalkeeper McKee got his angles spot on to make the block.

Eventually the second Magherafelt goal came. Higgins field a McKee kick-out before heading goalwards. He took a return pass from Devlin before tucking his shot under the advancing ‘keeper and his side were within a point, 0-11 to 2-4.

When Sean Duffin was fouled, Terry Devlin’s free tied the game but up stepped James Walsh to win the resultant kick-out and setup Oisin Conaty who tapped over to restore the Armagh lead.

In the 58th minute Conaty won and scored a penalty, sending McKinney the wrong way, to seal Magherafelt’s fate.