An IT apprenticeship scheme originally created by nine businesses in the Mid-Ulster, North West and North Antrim areas has proven so successful that its founders have launched a Northern Ireland wide scheme for 2020. 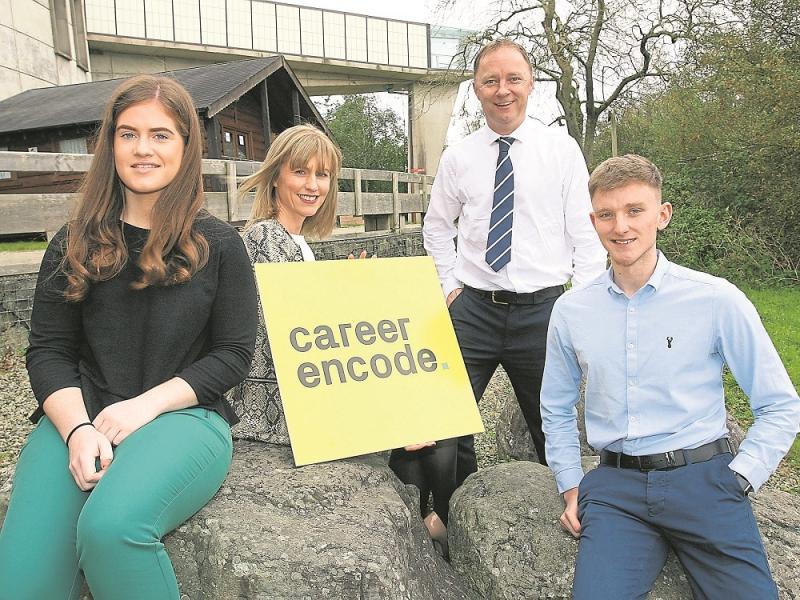 AN IT apprenticeship scheme originally created by nine businesses in the Mid-Ulster, North West and North Antrim areas has proven so successful that its founders have launched a Northern Ireland wide scheme for 2020.
Career Encode, which sets out to fill a skills gap in the IT sector, allows school leavers and those wishing to change careers to embark on a career in IT without the financial pressure of paying college fees.
Successful applicants will obtain an internationally recognised Foundation Degree qualification accredited by Ulster University and receive a full salary.
The nationwide rollout of the scheme was showcased at an event at Catalyst Ecos Innovation Centre in Ballymena recently, where firms already taking part discussed the benefits of the initiative since it was launched as a pilot in 2018. They called on their peers to join the programme.
Bloc Blinds in Magherafelt is one of those companies.
Mark Wilson, IT Director with the town centre business, said: “Since our establishment only eight years ago, Bloc Blinds has become a leading employer in Mid Ulster.  Our technology underpins our success.  We are pleased to be a founding member of this Career Encode initiative to develop and nurture the talent we need to continue to grow.”
Alan Davis from Magherafelt, who secured a Career Encode apprenticeship with Bloc Blinds, praised the scheme.
Hed said “I found Career Encode to be a better alternative to university as it gives the ability to learn and work in a real workplace.”
FP McCann was another high profile company involved with the apprenticeship scheme.
The Knockcloughrim-based company's IT Manager Brian Law said: “FP McCann is one of the largest employers in the mid Ulster region. Our bespoke IT infrastructure and software is critical to the sustainability of our enterprise.
“We were so impressed with the high calibre of the applicants that we offered two apprenticeships as opposed to one. We are looking forward to continuing our investment in a skilled IT team with the Career Encode initiative and would strongly recommend it to any business that is experiencing difficulties in recruiting staff with technology skills.”
Ronan Rafferty from Dungiven secured a Career Encode apprenticeship with FP McCann.
Ronana said: “I was very interested in the ability to earn money whilst getting experience within the working environment.”
Working in collaboration with Northern Regional College, the scheme has already appointed 12 new IT apprentices who will build careers within a rapidly growing sector, which, according to the Skills Barometer Report 2019, compiled by Ulster University Economic Policy Centre, will grow by 50% over the next decade.
With this in mind Career Encode is seeking more Northern Ireland businesses to sign up to the scheme to ensure the IT talent resource here is not outpaced by demand.
Camilla Long, Director of Bespoke Communications, which specialises in training and leadership development, is acting as an independent facilitator for the existing 11 employers on the scheme.
She said: “One of the biggest hurdles for businesses today is sourcing staff, particularly IT staff. This scheme allows participating companies to take the IT skills gap into their own hands by developing a future workforce for their business.
“We had a phenomenal response to the first initiative with 89 young people of exceptionally high standards vying for 12 apprenticeships. We anticipate that the demand for next year’s intake will be so much higher.
“The benefits for participating companies are about much more than alleviating technology staffing needs. Being part of Career Encode sends out a message to the next generation that you provide a workplace with a positive working culture that nurtures long-term career goals all while allowing you to develop employees with the skillset that you need for your future.”
For further information log onto www.careerencode.com