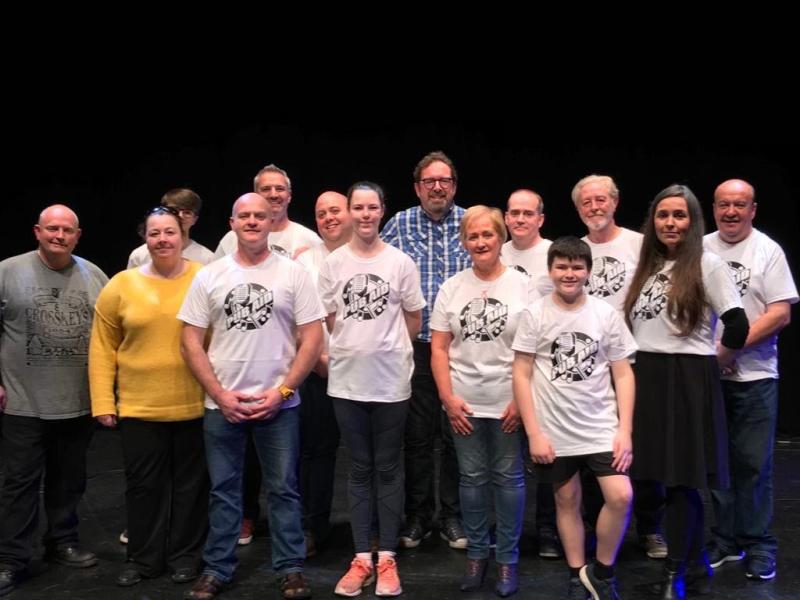 Pandy Walshe with some of the contributors to the special Pub Aid musical project.

A GROUP of Mid Ulster musicians have united to record a song and music video to raise cash for the homeless.
The artists, which will include a children's choir, will record an aptly named track written by talented Magherafelt singer/songwriter Pandy Walshe.
'Don't Pass Me By' will see around 60 musicians gather for the Live Aid style song and music video, directed and produced by Joe and Donna Murray.
Pandy, who described the project as “very special”, told the County Derry Post: “I wanted a range of voices to sing alternate lines that creates a completely different dynamic to a single performance of the song.
“The process has been running since May of this year and is now at the final stages and ready for release”.
Pandy has also organised a fundraising concert to officially release the song and video in Magherafelt Parish Centre on November 7.
A great line up of artists is set to perform at the event, including Niamh McGlinchey, Wayne Rodgers, Harbour Annie, Tanya McCole and her band, plus many more talented artists that promises to be an excellent night.
This will be the first opportunity to see the finished video and to hear the song.
Pandy said: “It’s like a premiere.
“No-one, including myself, has seen or heard the finished article so we are all anticipated and excited to see the final cut.
“Many artists need to be thanked for their invaluable contribution to this charity and I hope that the support of the public will be acknowledgement of the effort made by all involved”.
So November 7th folks is a date that should be put in the diary!
The concert will start at 8pm sharp and will finish at 10.30pm.
Admission is £10.00 with all proceeds going to the Welcome Organisation in Belfast.
The Welcome Organisation will be represented on the night to give an overview of the support offered to our homeless living in Northern Ireland.