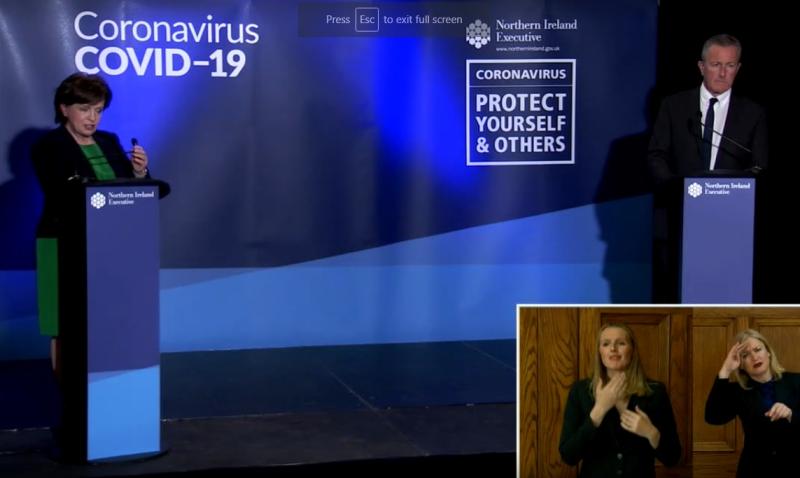 The Ministers for Finance and the Economy have spoken about the balance that needs to be struck between saving lives and rebuilding the economy after it emerged that 13 more people have died in Northern Ireland.

That brings the total number of COVID-19 deaths in the country to 263, according to the Department of Health.

The latest figures released by the department reveal there are 37 patients being treated in intensive care departments for confirmed or suspected cases of the virus.

Some 689 patients are currently being treated for Covid-19, with 2,765 people having been discharged from hospital.

There have been outbreaks in 58 care homes.

Finance Minister Conor Murphy offered his sympathies to all families affected including DUP representatives Edwin Poots and Jeffrey Donaldson who lost their fathers in the past 24 hours.

Mr Murphy said over £900m has been provided by his department to support the health service, protect businesses and help the vulnerable.

She said an essential part of the grieving process is visiting the graves of loved ones and she hopes regulations will be dealt with swiftly to allow people to ‘visit graves in a controlled way – this will bring comfort to many’.

It follows public pressure to re-open cemeteries after individuals held a dignified protest outside the City Cemetery in Derry on Monday.

The Health Minister has also said he doesn’t see any reason why people shouldn’t be able to visit cemeteries at this time.

Mr Murphy was pressed on the issue of cemeteries reopening but disagreed saying that the current measures have been effective.  He recognised how difficult it is for people and added that the issue will be discussed at Stormont tomorrow.

"I look forward to hearing from the Chief Medical Officer and the Health Minister tomorrow, talking over what our central message has been and how that has worked, and how an alteration to that approach is compatible with what we are doing.

"We will have a discussion in relation to all of that tomorrow and the Executive will attempt to reach an agreement on the way forward."

He added: "We are now in the phase, in the last ten days, of the highest number of daily deaths that we've had in relation to COVID-19, so we need to ensure that our central priority which is about saving lives remains that number one priority but of course where we can respond to people's needs we will want to look at that in a very sympathetic way."

Referencing comments made by Bishop Donal McKeown, News Letter Political Editor Sam McBride asked if Sinn Fein has an all-island approach to cemeteries as the Bishop had said that cemeteries were open in the South of Ireland and should open in the North.

Mr Murphy said it was 'unfortunate' that the Bishop characterised differences in opinion on the matter as 'political infighting' and believed that if he 'reconsidered that choice of words he might come up with something different'.

While the primary focus is to protect lives, the Economy Minister said, it would be ‘very difficult’ to overstate the damage COVID-19 is inflicting on the economy.

Work is being done to distribute over £400m in support packages across the country, she said

There have been 2,400 applications for a £25,000 grant which was made available to businesses on Monday.

The DUP representative said the tourism industry will be at the centre of recovery.

A new tourism recovery steering group will be set up involving key stakeholders ‘to drive forward the rebuilding’ of the industry.

Both ministers were questioned about comments made by Sinn Fein MLA Declan Kearney when he accused right-wing elements and ‘some unionists’ of putting the economy before public health.

In response, the Finance Minister said a balance has to be struck.  While he has ‘huge sympathy’ with people who want to get out, especially those looking to visit loved ones who have died and people who want to engage in prayer in religious facilities ‘but our key message is stay at home, only travel when it’s essential and when doing so practice social distancing’.

The Economy minister, described it as a ‘very regrettable intervention’ by the junior minister and said it is not a time for ‘ideological politics’.

She added that it is not about 'lives vs the economy' but believes plans have to be made for a ‘safe, phased, and step by step transition back to normality’.

COVID-19 ‘will be with us for some time’ and she has been in discussions with the British Chancellor and Business Secretary about ‘working safely’.