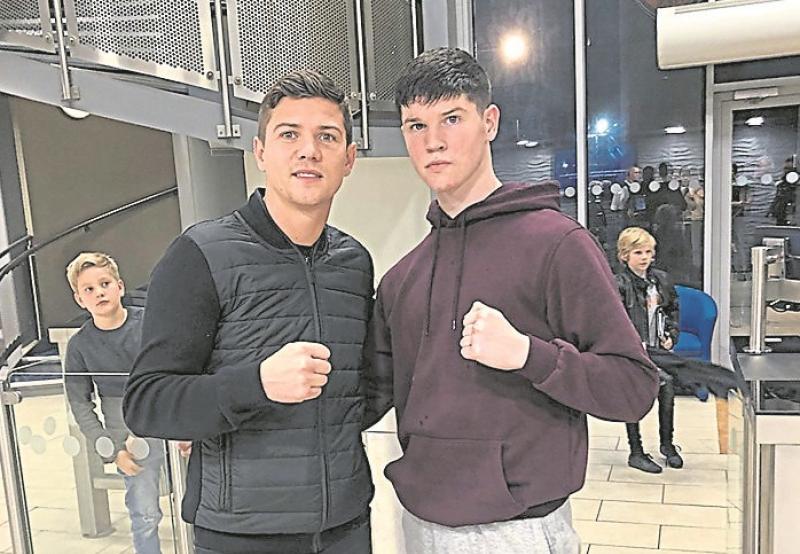 On Saturday night last, Donegal’s border town club Raphoe faced a highly-rated St. Paul’s Boxing Academy from Hull in the Kingston Suite in the KC Stadium, home of Hull City FC.
Guesting for the Raphoe Select was Derry evergreen Ethan McCaul, who featured in a cracking light welterweight contest when he locked horns with Hull’s hottest boxing property, the power-punching Teddy Jackson.
Both boxers exploded into action at the sound of the first bell as they tested the weight of each other’s punches. It was the St. Joseph’s boxer’s punches, his electrifying hand speed and pinpoint accuracy that was to be the telling factor in this contest. McCaul punished Jackson with some jolting jabs and accurate and timely body shots throughout three hard-fought rounds and when McCaul’s hand was raised in victory on a split-points decision, he punched the air with joy. As both boxers left the ring they received thunderous applause from the 300-plus crowd for their performances.Co. Derry schoolboy Declan McNamee turned in a very impressive performance in the opening bout of the evening when he recorded a clear-cut points victory over St. Pauls’ Will Fenton as he chalked up his third win of the current season for his club St. John’s, Swatragh.
There was no joy for his clubmate, the stylish Ben Cooke however as he lost out to Hull’s Bailey Millaar on a 3-0 verdict in the Youth 1 at 52kgs.
The Raphoe Select went down on a 7-5 scoreline as Ciaron McDaid, Daire Feeney and Liam McMonagle all recorded impressive points wins and Tom Doherty, Raphoe and Jude Gallagher, Two Castles, could count themselves very unlucky to have lost out on hairline split decisions.