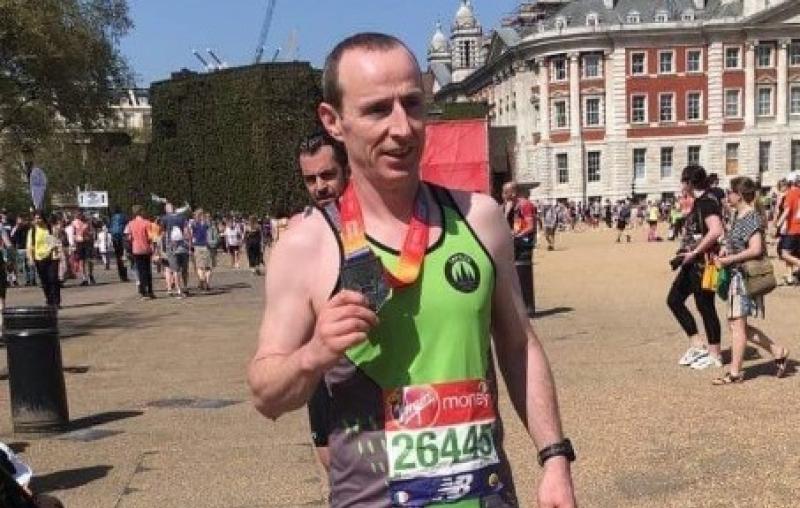 Sport began for a Niall McGuigan as a teak tough defender on the Gaelic football scene in the green and white of Swatragh.  He also played hurling with the club before moving into cycling.  He cites Eamon Coghlan as one of his sporting heroes and now in the green of Tafelta AC, he is aiming to take his marathon time below the three hour mark.

What is your first memory of sport?
Living in Swatragh, my first memories would be watching my club Michael Davitts teams playing football, hurling and camogie.

Who was your idol growing up?
As a person who loves a lot of sport, I have a few.  There is Paul McGrath in soccer, the boxer Steve Collins, the runner Eamon Coghlan, former Derry midfielder Brian McGilligan and one-time Swatragh Captain and full back Philip Mooney (senior)….there weren't too many balls got past him and even less men.

Have you always been involved in sport?
Yes, from football at primary school and later on became involved in hurling and cycling.

How long have you been involved in running and when did you join the club?
I started running about six years ago then joined Tafelta AC coming up to three years now.

Why did I start running?
It started off at work.  A friend of mine, Ronan McCrystal, wanted to raise money for the NI Children's hospice who were helping his son Jack, and came up with the idea of entering teams into the Belfast marathon relay, which we did 2013 and 2014.

What type of events do you compete in and what distances are involved?
From 5k to marathon distance.

Which one do you rank as your toughest?
Each event is tough in his own right, but if I had to pick one it would be the marathon.

What has been the most memorable so far?
It would have to be London marathon 2017 - a field of over 40,000 runners and million spectators along the route.

What have been your main achievements to date?
That would be getting my marathon personal best down to 3:07.

What has been your highest point so far?
Every personal best in all distances is a great achievement but when you get one in a marathon distance it's that little bit more special.

What is your most disappointing point?
I don't really have one in running. We all like a PB in every race but that's never going to happen.

Have you had any injuries in your career?
I have had a few injuries but thankfully nothing too serious to keep me from running.

How often do you train and what all does it entail?
I train anything from 5-7 days a week.  That mostly entails anything from five miles, up to long runs of 20 miles, tempo runs and hill repeats. Francis Purvis, the Tafelta coach, always keeps me right.

What are your targets for the rest of 2019?
To stay injury free, as I have again I have qualified through the "good for age" time for London marathon April 2020.

Is there a long-term goal you have? Something you have always wanted to achieve?
A Sub 3-hour marathon is my goal and hopefully with the help of Francis Purvis this achievement will happen.

What advice do you have for anyone who is thinking about taking up running?
Definitely join a running club and all running clubs cater for all levels.  The advice and coaching you get will be right for each individual. Francis Purvis brought structure to my training which has knocked nearly an hour off my marathon time in the last three years. But most importantly I have met so many great people and a lot of who are now great friends.