Forum comes alive for return of the Derry Boys 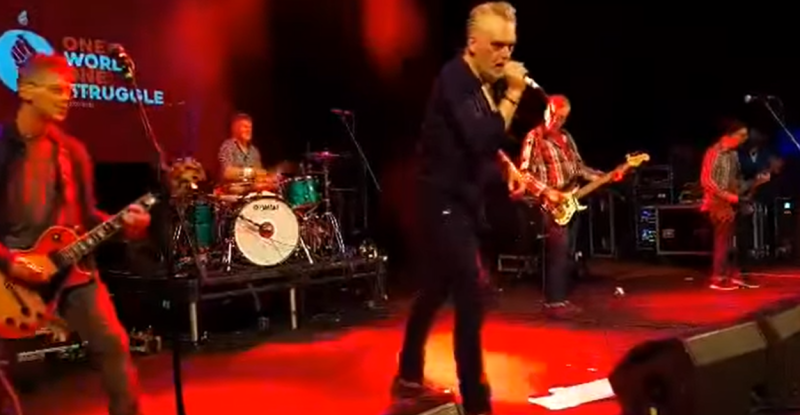 Paul McLoone fronting the Undertones at their Millennium Forum concert.

This was an evening for unashamed indulgence, a celebration of a fresh perfect pop art form. Good songs never go out of fashion, and neither do the Undertones.

Thank God, Billy, John, Damian, Mickey and Paul have never grown old. and continue to retain the essential ingredient that made them such vital contenders in all their incarnations and albeit brief dalliances with other types of music, and long may that continue.

The Undertones fired more power pop than most can handle. They never fell into the misfit-wailing cliched, the mock anarchic approach of the punk genre. They remain innocent.

Instead, they travel the route by taking everyday issues such as teenage angst, girls, family, adolescence, love, girls, rejection, and the weather with the help of the likes of Terry, Norman, Billy, Julie, Hannah, Jimmy, Eddie and, of course, chocolate and girls, did I mention girls? - into a set of their skilfully structured, dramatically well-balanced songs that evoke a groove that's unique to themselves.

The packed Millennium Forum on Friday night last saw an appreciative audience of all ages indulge themselves in the sheer joy of these 'wondertones' back in their hometown at last.

Dance was not compulsory and singalongs were attempted but between tunes the Bradley-McLoone banter and blather kept us smiling. I mean how can you not feel good listening to Teenage Kicks twice in the middle of a Derry crowd?

On stage, the bashful charm of the O'Neill brothers, Damian and John, exploded into a vivacious self-deprecating style to prove even though they might be the 'quiet ones', these mischievous innocents play in a way without relinquishing their grip on fundamental and insuperable pop perfection.

The performance was, of course, based on the foundations set during every song by bassist Mickey Bradley and drummer Billy Doherty.

These two have avoided becoming predictable exponents of an exact, specialist romance-pop performance.

Their contributions require stamina, irresistible detail, and just the right amount of dare and they certainly deliver on that front, every time.

And what about the 'new boy'? Well, he's only been there 23 years after all. Paul McLoone still performs as excitedly as if it's his first night.

He straddles the stage in his mixture of Tom Jones, Elvis Presley, and Mick Jagger personas and completely owns it.

His enigmatic, energetic qualities allow him to make every song his own too, old or new, and of course, brings the audience with him through the scandalously smart sequence of pop songs, audience participation included!

And what about the audience? Well apart from a few older bucks trying to mosh near the end, nearly killing themselves in the process and the two girlies who burst into a scratching match for some unknown reason the crowd beamed, bopped and bounced for the 90 or so minutes the band was on stage.

Touts performing prior to the Undertones at the Millennium Forum.

Derry really comes to life on an Undertones night.

There's a buzz about the town before and after. The band delivered yet again. They understand what works, that divine energy of melody that makes them the greatest group of their kind.

On Friday night, Derry Girls looked good but it was the Derry Boys who stole the show!

The energy produced could fire an atomic reactor if we had one. The support acts, Tramp and Touts, excelled also and set the scene nicely. Their performances won them new admirers so no doubt we'll be hearing more of them as time goes on.

And just for the record their 32 song set list comprised of: Family Entertainment, You've Got My Number (Why Don't You Use It); In Need Your Love The Way It Used To Be; Jump Boys; Billy's Third; Love Parade; Thrill Me; Jimmy Jimmy; Tearproof; It's Going To Happen; Enough; Teenage Kicks; True Confessions; Oh Please; Nine Times Out Of Ten; I Gotta Getta; Girls That Don't Talk; Here Comes The Summer; When Saturday Comes; Dig Yourself Deep; Wednesday Week; Hypnotised; (She's A) Roundaround; Girls Don't Like It; Listening In; Get Over You; More Songs About Chocolate And Girls; Male Model; Here Comes The Rain; I Know A Girl; My Perfect Cousin and Teenage Kicks... again.