OPINION: The case for a new music museum for Derry

Derry businessman and music lover SEAMUS KENNEDY says its time for Council to recognise the huge significance of our musical heritage and to start to celebrate it fully. Here Kennedy makes the argument for the currently-empty city landmark, Austin's of the Diamond [above], to be fully redeveloped to encompass a museum, studios and performance space.

It’s hard to believe, that it is five years since the great year that was City of Culture 2013.

Five years later we find ourselves still waiting for full implementation of the main Signature Project and the Walls to come to life.

It is time, now, to fine tune the legacy of 2013 and do something also that will add to Derry’s evening economy.

The two things that I think of most, when I think of 2013 are the wonderful Return of Colmcille and the Fleadh Cheoil.

And there is so much we could do to build on these and other events.

I would like to think the Council will, on the back of the success of 2013, revisit Paddy Bogside's plan for a statue of Colmcille on the river Foyle. This was, and still is a wonderful idea that still should be looked in to.

It would now also be a nice tribute to a man who did a lot for his city.  I believe the original plans should be made public and let the people decide. I believe the rail track was involved to get to the viewing gallery of the statue so maybe this could be taken in to consideration with the new railway station and track development?

Our Emigration, Genealogy, Amelia Earhart, Poverty, Sport, Shirt Factory and Maritime stories are still not out there, or told or exhibited, for all the importance they hold for our history and heritage.

The biggest memories of 2013 all involve music - the one thing that connects everybody. The Venue may be a distant memory - but One Big Weekend, the Tattoo, the International Bagpipe Competition, the Fleadh Cheoil and the Son and Daughters Concert were all top events (among others) and have left great memories.

Who will ever forget everyone singing Danny Boy on the 100th anniversary of its first release at the Guildhall? And it is precisely music and Derry’s massive contribution to the world of music than I feel should now take priority.

Remember Music City and the Music Promise? Well, I feel this area needs to be fine-tuned. It’s time for Derry City and Strabane District Council to fully recognize our wonderful musical heritage, and celebrate it. 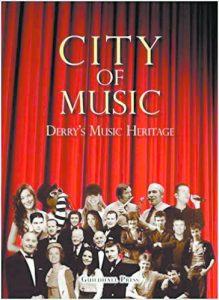 It is ten years also since Guildhall Press released a book called 'City of Music' a wonderful book - actually I would call it a bit of a masterpiece - and I can say, the people behind this book were well tuned in.

I think the time is now ripe for Derry to have a flagship music museum/or Centre, something unique and a special place to visit, like no other on the island.

Can you imagine some of our old buildings transformed in to a museum of music, let’s say Austin’s on the Diamond?

I will quote from the back of the City of Song book - which could serve as a welcome sign to the new amenity:  “Step into a wonderful world of marching bands and balladeers, of choral champions and pop idols, of jazzmen and showbands, of opera divas and classical musicians, of composers, of icons and legends in the city of music and take a trip through the years with Derry’s best loved ambassadors.”

There you can discover the origins of two of the world’s biggest songs, Amazing Grace and Danny Boy. It will bring alive the amazing story of Cecil Frances Alexander who wrote  hymns such as, All Things Bright and Beautiful, Royal David's City, and Green Hill Far Away.

It will tell the amazing stories and careers of  Josef Locke, Phil Coulter, Patrick O Hagan, James McCafferty, Undertones, the little Gaelic singers, Johnny McDaid, Gay McIntyre and Johnny Quigley, Dana, Paul Brady - far too many to name everyone in one article.

From marching bands to choirs, dance bands, showband, Jazz and Ceili bands, Folk Rock and Punk, our Irish traditional music, we have an incredible story to tell.

Then you have the incredible Derry Feis story!

The museum would tell the story of our different instruments, the stories behind our songs, the people who left these shores, our factory workers, the songs we sang during the Trouble, and the songs during the war.

It will tell our story through costumes, instruments, recorded and live performance, and memorabilia.

It will have recording booths where people can record their version of say, Danny Boy or other songs; spaces where they can wear vintage clothing and dance to a bit of jazz or just sit down and listen with a good auld fashioned cup of tea. It will be a place too where you can sit also and have a coffee or a beer.

In this new facility, our younger generation can amuse themselves in dance/pop-routine studios.

We would our course involve our wonderful young local talent. We would have some of our world class traditional musicians giving demonstrations (Gabby Fitz on Uileann pipes, for example.)

The museum would only be part of our story. We need plaques on the houses where Undertones, Joe Locke and Phil Coulter lived. Indeed, we could redesign the steps at Abercorn Place where Phil lived to look like piano keys - and in general have much more visual musical presence across the city.

Do you remember the wonder Lumiere in Derry in 2013? My favourite visual piece was 'A TEENAGE DREAM'S SO HARD TO BEAT' on top of the BT Tower.

But - and it's a big but, just as we were given a glimpse of what our music story would feel like, then it was taken away.

We need to list the importance of our music venues and the history behind them.  We need to fully tell this story and show off more. We need to think bigger and bigger - maybe put a roof over part of Ebrington and turn this in to a Concert sSquare.  Imagine watching the tattoo or Andre Rieu in a bit of comfort, regardless of weather.

I have mentioned only a few of our great ambassadors from different eras, but today Derry is alive with some of the best local talent you would get anywhere. Too many to mention all.

Recently Connla, a fantastic new Traditional Irish group, made front cover of a World Trad music magazine. This is just one example, of young people from Derry, on top of their game.

The sound of our neighbours, such as Clannad and Eyna from Donegal, all could be part of a museum that could be a major attraction to many people.

And it's not just for the tourists either. We could create something special that would involve using music as therapy for people lonely or suffering from mental health issues. Recent medical studies are talking about the importance of music in this field. And we already have people working in this area.

The Asian market is opening up for tourism. A couple of years ago we had two  Japanese men come to my B&B, the whole way to Derry just to hear Danny boy, when it was requested and played in Peadar's bar, they closed their eyes and cried.

We are totally underestimating the gift we have been handed down.

Karaoke  is massive in Asian Countries; imagine if they could wear vintage gear and sing along and have a song as a souvenir, we need to tap in to what people want.

There are music museums in cities like Coventry, Brentford and Liverpool; imagine what we could have, with our history and material. Music is to Derry is what Mozart is to Salzburg and what The Beatles are to Liverpool.

I commend our Council for the great work that has been done, fantastic festivals and events, but I do sincerely hope this time that they will look seriously at the Legacy of 2013: it’s all about the music, it’s one of the greatest gifts in life, it’s a massive industry, and music breaks down barriers in a way like no other. It has a language of its own that brings everyone together all the time. We owe this to the great people who entertained us, generations ago; music has sustained people though the worst and hardest times in our history.

Recently I created a survey monkey poll to have Phil Coulter awarded Freedom of Derry City. Just one tiny piece of his story is, he wrote a song that the lLegend Elvis recorded.  Elvis also recorded Danny Boy and Amazing Grace, the two huge songs with links to here.

Visitors almost don’t believe you, when you tell them these stories.

We have a musical history and heritage that will rival anywhere. Other cities would love to have what we have, let’s get rocking with this one.

The foundations have already been laid by the people who compiled the great book called, City of Music and especially those great people, many of whom have long since gone, who entertained Derry for decades.

When it comes to tourism and what brings people, we could use Glasgow’s slogan: 'It’s the people who make Derry.'

It is time to celebrate this; the same applies in the fields of literature, poetry, sports and politics.

From Colmcille to the present day, our people will always be our biggest asset.

Our musical heritage belongs to us alone, no one else or place can lay claim to it.

It is up to us now to protect our heritage, celebrate it and tell it in a unique and spectacular way.

The step change in Derry since City of Culture 2013 itself, is a great story. We can also showcase the highlights of that year along with our great Jazz and Halloween festivals. Think of the merchandise alone that’s not tapped into. People visiting during the summer will be more aware and will want to come to our great events.

So to sum up: Things Can Only Get Better in The Town I Love So Well, on The Banks of the Foyle!

Someday soon I hope we can show off All Things Bright and Beautiful and have All Kinds of Everything.

When you walk in to our new museum and Hear My Song, only then, will it be Congratulations!