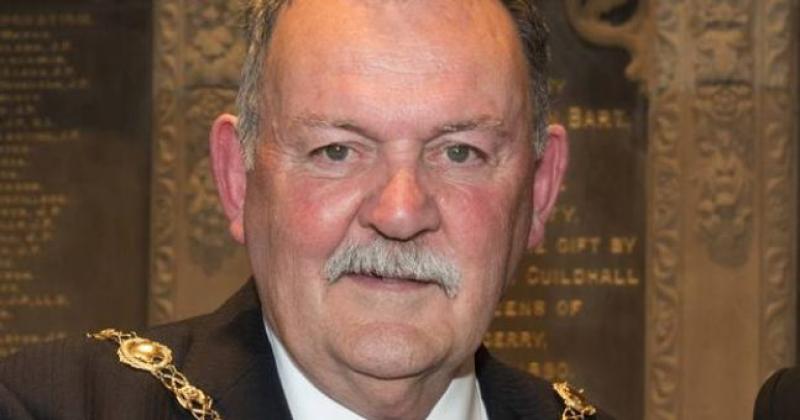 The DUP in Derry has said it is seeking legal advice on whether the Mayor has been in ‘breach’ of his authority over the past year. It comes after a row erupted at Thursday afternoon’s monthly meeting of Derry City and Strabane District Council, following a discussion on the lighting up of council buildings. The fall out comes ahead of tonight’s AGM where Sinn Fein’s Maolíosa McHugh will hand over the chains of office to the SDLP’s John Boyle, who is currently the Deputy Mayor of Derry and Strabane. Earlier this month, councillors agreed to light up The Guildhall and council offices in the colours of the Palestinian flag in solidarity with those who lost their lives during a recent protest in Gaza. However, unionists did not support the move. A special meeting was then held to discuss the ongoing issue in Palestine, during which the independent unionist councillor Maurice Devenney proposed that the Guildhall be lit up in the colours of the American flag to acknowledge the ten people murdered during a mass shooting at Santa Fe High School in Texas on May 18. The Mayor of Derry and Strabane, Maolíosa McHugh told Alderman Devenney that he could raise the issue at another meeting if he wished. The matter was raised again at Thursday’s meeting, held in the Guildhall, where Alderman Devenney again called on council to light up council buildings in red, white and blue to acknowledge the ten deaths, given that council had already marked the deaths in Gaza. Responding, the Mayor said that Alderman Devenney should go through the ‘normal’ procedures if he wished to raise the matter, as he had not used the proper protocol. This was challenged, to which the Mayor replied: “I’ve ruled on this”, which prompted the DUP’s David Ramsey to describe the move as a ‘dictatorship’. Later in the same meeting, the Ulster Unionist councillor Derek Hussey proposed that to mark Cystic Fibrosis week which runs from June 18-24, that council buildings be lit up in yellow, which was then accepted by the councillors present. At that point, Alderman Devenney asked if council could go back to his previous proposal regarding Texas, adding that he was now calling on the Mayor to sympathise with the people of Texas for a ‘third time’. “For the third time I will say to you that you should go through the normal procedures,” the Mayor responded, before adding that he no problem sympathising with the people of Texas. “This is the third time you’ve raised it, I thought it was inappropriate, I’ve already given you that ruling and I’m not going over it again,” he added. His party colleague, Sinn Fein’s Conchúr McCauley added that if the council buildings were to be lit up every time there was a mass shooting in America, it would happen ‘all year round’. At that stage, the DUP’s Drew Thompson asked the Mayor: “Just for clarity, are you ruling out that proposal?” The Mayor replied yes, with Alderman Thompson adding: “On what grounds?” Responding, the Mayor said that when Alderman Devenney made the proposal initially ‘it had come under issue’ and as a result, the Mayor had suggested that he bring it forward to full council using the ‘normal procedures’. “I’m not going down that road again,” he went on, adding that he had accepted Alderman Hussey’s proposal as he had raised with him prior to the meeting. Alderman Thompson then revealed that the DUP were now seeking legal advice over the Mayor’s decisions in the past year. “I’m listening to what you are saying Mr Mayor but I believe you are in breach of your authority,” he said. “I will be seeking legal opinion on this, not from our local council as I’m not putting them on the spot, but I will be seeking legal advice because I believe that you are in breach of a number of things as Mayor of this council.” The Mayor responded: “In your opinion.” “I will prove it,” Alderman Thompson hit back. His party colleague, Graham Warke, then asked the Mayor to go back to a proposal he made a number of weeks ago, seeking for the council buildings to be lit up to mark Mental Health Awareness week. The Mayor replied: “Alderman Warke, for the first time with you, and there won’t be a second time, I ruled on this and that’s the ruling can we leave it that.” Alderman Thompson then said: “Prods are not allowed to speak.” The Mayor was then asked by Alderman Warke if this was his last meeting, to which Mayor McHugh replied: “No it’s not.” His last meeting as Mayor will take place later this evening in the Guildhall at 7pm.
ADVERTISEMENT - CONTINUE READING BELOW