A Derry councillor has objected after young unionists erected flags and painted kerbstones in the Waterside, in the run up to the marching season.
The SDLP's Martin Reilly said that those behind the move are disrespecting their own flag - and that Waterside residents do not want people marking territory.
He commented: “Yesterday saw young unionists erecting unionist flags at Caw Roundabout and fresh kerb stone painting at the junction of Nelson Drive and Crescent Link.
"Once again some people in the city’s waterside want to mark territory and push their identity on to everyone. People have contacted me making it clear that the only thing they want to see erected at Caw Roundabout is traffic lights.”
Continuing Councillor Reilly said, “As with previous years, people will be perplexed that these new flags erected yesterday will be left to blow tattered and torn well after the summer has passed.
"That’s no way to respect the national flag of any country and I would appeal to unionists to celebrate their culture in other ways that don’t involve such disrespect to their own flag or actions that are about cultural supremacy.” 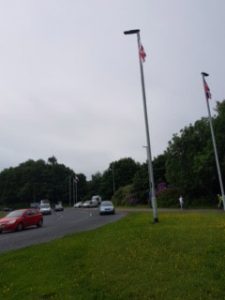