Positive local links being made at joint trade mission to Philadelphia 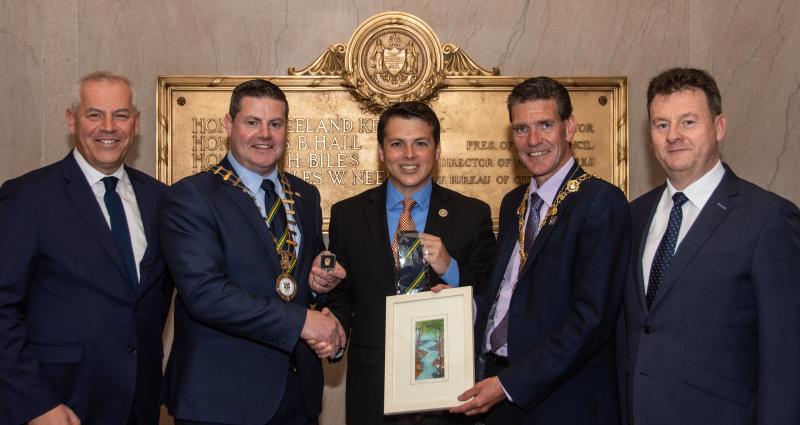 The Mayor of Derry City and Strabane District Council Cllr John Boyle and An Cathairleach Seamus Ó’Domhnaill of Donegal County Council, along with senior representatives from Derry City and Strabane District Council and Donegal County Council, and a number of companies from the North West returned this week from a very successful trade delegation visit to Philadelphia. Mayor of Derry City and Strabane District Council, Cllr John Boyle said this is the second visit by the North West group to the city of Philadelphia and was organised to build on the initial good work that was done during a visit to the city last year. He said the Philadelphia market was a significant one for companies in the North West to tap into and it was important the Derry/Strabane and Donegal Councils were working in close collaboration to promote the North West City region to further develop links and relationships previously established between the two cities and regions. The Philadelphia trip coincided with a tourism and business visit to New York the same week by the Derry and Strabane Mayor and a number of Council officials to attend the start of the Legenderry Finale leg of the Clipper Round the World Race before its departs for Derry to take part in the Foyle Maritime Festival taking place in July and to officially launch the city’s International Halloween festival to the US audiences. Mayor Boyle said the visit was hugely worthwhile and a great opportunity for Councils to work closely with its strategic partners and local businesses to further develop ties with the US in particularly with businesses in Philadelphia and New York. “I was delighted to be part of the delegation that travelled to the US to continue with the excellent work that is being done on the ground to develop business links, put job creation and investment to the fore and promote our unique tourism and cultural offering to a new and captive audience. It was a very busy visit but very worthwhile for everyone involved. There is really strong Derry/Strabane and Donegal connections in Philadelphia and we have a lot in common in terms of industry and our links to the Port so working with them to further develop those business links is hugely important,” he said. Among the companies who travelled to Philadelphia were local agricultural company, Agri Fleming and data company Atlantic Hub from Derry and (insert details of Donegal companies). An Cathairleach Seamus Ó’Domhnaill of Donegal County Council said the work being done by the two Councils in profiling the North West as a gateway to both the EU and UK markets, and a unique and vibrant place to do business is vitally important. and really effective. I had the opportunity to see this collaboration between the two councils at work and the positive reception in the US for the strong proposition we have to offer. The trip was extremely successful as an opportunity to identify new opportunities for foreign direct investment and to promote the growth and development of the North West as well as form new relationships with key stakeholders in the spheres of education, politics and business, and to showcase the unique products and services they have to offer to the right market.” During the Philadelphia trip, the North West region delegation met Mayor Jim Kenney, Councilman Bobby Heenan and Congressman Brendan Boyle, and attended a number of functions and events including a Diaspora engagement event and a trade mission event. The group met with the Director of the NI Bureau Norman Houston OBE and the Deputy Irish Consul General Anne McGilicuddy as well as representatives from the economic development units in neighbouring areas of Chester and Montgomery. The delegation also attended a breakfast event at the Irish Immigration Centre of Greater Philadelphia. In New York, in addition to attending the Clipper Connect Business Series event, the Derry and Strabane delegation met with the British and Deputy Irish Consul General and took part in a City Region of Opportunities event that was attended by business investors and tourism culture, diaspora to showcase the region and up and coming events including the Foyle Maritime Festival and the International Halloween festival. Mayor Cllr John Boyle speaking after the visit said: “We really believe that our ongoing positive engagement with the US is part of our long-term strategy and commitment to develop relationships and links that will help us attract investment, develop trade links that will in turn see tourism numbers increasing, jobs being created and money invested. To date we have enjoyed some success and are confident that our continued and joint efforts." Pictured above: An Cathairleach Seamus Ó’Domhnaill of Donegal County Council and Mayor of Derry City and Strabane District Council Cllr John Boyle pictured with Congressman Brendan Boyle during their recent trade visit to Philadelphia, also included is Derry City and Strabane District Council Chief Executive John Kelpie and Donegal County Council Chief Executive Seamus Neely.
ADVERTISEMENT - CONTINUE READING BELOW