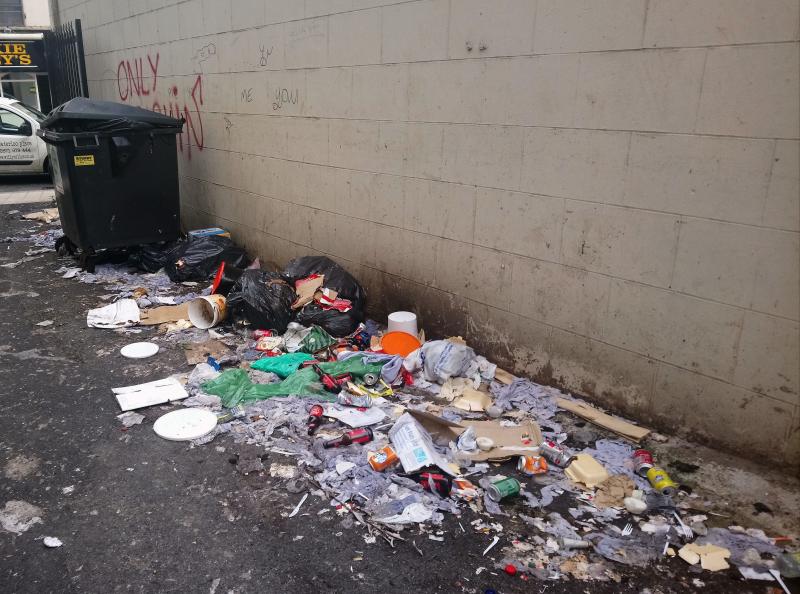 THERE have been no prosecutions or penalties for those responsible for continually illegally dumping food waste in an alleyway in Derry’s city centre, it has emerged. The laneway is situated on William Street, beside numerous local food outlets, and has been cited as a health hazard due to food waste and rubbish that has been indiscriminately dumped there for years. Both the Northern Ireland Environment Agency (NIEA) and Derry City and Strabane District Council said they have been working ‘proactively to address the ongoing issue’ and have undertaken a number of recent operations where they spoke to local traders and conducted clean-ups. However, the food waste has now built up again. Sinn Féin Councillor Sandra Duffy has spoken about the issue in the past and this week said business owners have a responsibility, along with other agencies, to ensure the area is kept free of waste. “All people who are landowners throughout the city need to come together to have an understanding of who needs to be taking responsibility for this because litter and illegal dumping in that area can’t be allowed to continue,” she said. “The alleyway is privately owned and business owners there need to be taking responsibility for it because it just becomes a complete eyesore for the whole community. “Anywhere that rubbish is dropped there is the possibility of having rats and mice as they’re going to be attracted to the food and rubbish lying around.” She added: “We have thousands of tourists in the city, I think every bed is booked up in the town, with the Foyle Cup and Maritime Festival. “To have dirt and rubbish and whatever else lying on our streets is completely the wrong look that we want to portray as a city. “But apart from there it is looking beautiful and the Council workers need to be commended for everything they’re doing to achieve that.” Mark Cherry from NIEA’s Environment Crime Unit has taken part in joint waste inspection visits at the site along with the council’s environmental health department. He said many local traders are ‘fed-up’ with fly-tipping in the area. He commented: “We have met with traders in the area to remind them about their responsibilities for storing and disposing of their waste correctly. “Many of them have reported the waste being dumped in the lane and are fed-up with the mess and potential hazard it is creating. “Fly-tipping is often viewed as a victimless crime but that couldn’t be farther from the truth. Clean-up, investigation and prosecution costs are a significant strain on the public purse and the illegal dumping also has a significant impact on our environment, wildlife and health. “In NIEA we are determined to tackle waste criminals who wilfully dispose of their waste illegally but we also want to inform and motivate people to change their behaviour. “To have respect and concern for their environment - for their own communities, neighbours and our economy,” Mr Cherry added. A spokeswoman for Derry City and Strabane District Council said that it is aware of the ongoing issue of commercial waste being dumped in the lower William Street area. She said: “The area is private land and while Council does not have responsibility for the site the Councils Waste, Enforcement and Environmental Health teams have been working closely with the Northern Ireland Environment Agency and City Centre Initiative (CCI) to carry out visits to businesses in the area to ensure that effective waste management systems are in place. “Council would like to take the opportunity to remind business owners that they have a responsibility to maintain the upkeep of this central commercial location, which is to the benefit of all businesses in the area and the local economy. “We will continue with the campaign to raise awareness, encouraging local businesses to take pride in their city centre and seeking a lasting resolution to the problem in conjunction with the NIEA.” The council has advised the landowners of their responsibility to ensure the laneway is kept clear and accessible at all times and the situation will continue to be monitored by the local council and the NIEA. Where a person is found guilty of indiscriminate dumping they may be liable on summary conviction, to imprisonment or to a fine up to £50,000 or both.
ADVERTISEMENT - CONTINUE READING BELOW