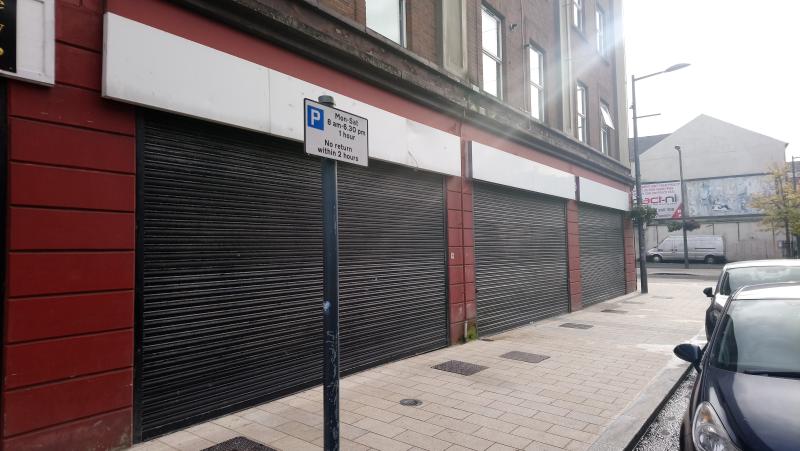 A new amusement arcade is set to open in Derry’s city centre despite almost 150 objections being lodged against the proposal, it has emerged. The applicant, Derry Amusements and Gaming Ltd, first lodged the plans in November 2016 seeking planning permission for a proposed change of use from a retail unit to a unit for gaming machines at number 33, William Street. The applicant was seeking to transfer his existing gaming license from his current premises at 15 William Street to 33 William Street, pictured above. There are a number of gaming arcades already operating in the street. In 2014, the old Derry City Council backed an approval for an amusement arcade at 38 William Street, which also houses a café, despite opposition from traders and a debt advice group. The application for 33 William Street came before a meeting of Derry City and Strabane District Council’s Planning Committee in September of last year. At the meeting, it emerged that 145 objections had been lodged against the plans, which included opposition from the House in the Wells, the debt advice service in Dove House, the Bogside and Brandywell Initiative and the Gasyard Development Trust. The SDLP Foyle MLA Mark H Durkan also submitted a letter of objection at the plans. Speaking at the meeting, Ciaran Devlin of Derry Amusement and Gaming Ltd, said that there had been a large number of objections to the plans but that a ‘lot of the objections were not based on planning grounds’. Local councillors agreed to vote against a planning officer’s recommendation to grant planning permission for the arcade on what the Sinn Fein councillor Patricia Logue described as ‘moral and humanitarian’ issues after hearing from those who work with people affected by gambling addiction. However, the Derry News can reveal that the new unit housing gaming machines will now open after the applicant took the case before the Planning Appeals Commission (PAC). It marks the second time over the last year that a decision by the local council to oppose a new gaming arcade has been overturned. In June of last year, a judge overturned a council decision to refuse a Newtownabbey-based firm a permit to open a new gaming arcade at a site in Shipquay Street formerly occupied by Dunnes Stores. The William Street application came before a hearing of the Planning Appeals Commission (PAC) earlier this year, which was asked to determine if the new gaming arcade would have a detrimental impact on the character of the surrounding area, and a detrimental impact on nearby properties. The commission found that the new unit would ‘not have an unacceptable effect’ on the character of the area, given that retail outlets is the ‘predominant use’ of William Street. It also said that while ‘particular concerns’ were also raised about the impact the new arcade would have on Pilots Row Community Centre. However, the commission said that given the distance between the two sites, and the fact that the centre was located on a different street, the impact would ‘not be unacceptable’. It continued that the ‘council had failed to sustain its reason for refusal’ based on planning policies and the application was approved. Commenting, the Foyle SDLP MLA Mark H Durkan said he was ‘disappointed’ at the outcome of the appeal. “I lodged a formal objection to this application and I am disappointed at Planning Appeals Commission determination,” he said. “The council are currently drawing up a new policy regarding gaming arcades and hopefully this give it more powers and firmer grounds on which to refuse these applications.”
ADVERTISEMENT - CONTINUE READING BELOW