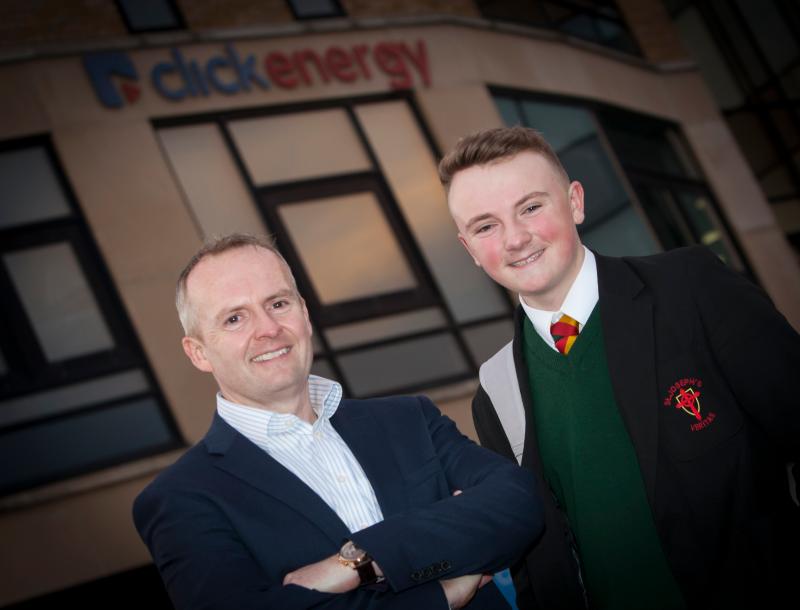 If there’s one thing local teenager Harry Wilson is not short of while living with Type 1 diabetes over the past decade, it’s energy! Harry (14), who was diagnosed when he was four years old, plays an active role in helping to raise diabetes awareness and is a role model for young people coping with the condition. He is fully supported not just at home and in school but through the family business Click Energy which a year ago chose Diabetes UK Northern Ireland as its official charity for 2018. The charity partnership selected by the Click Energy team, was inspired by seeing how well Harry, the son of Managing Director Damian Wilson, managed his diabetes from such a young age and show how you can still lead a normal life. Harry has also helped Diabetes UK Northern Ireland review guidance for young people managing the condition in school where they spend so much of their lives. He explained: “I have probably coped quite well because I’m used to having diabetes since I was four. It was more of a worry for my parents when I was diagnosed but it’s just part of everyday life now and as long as I stay on track managing it should be fine.” Harry is one of around seven pupils at his school with diabetes and as well as supporting each other they have the added support of classroom assistant Anne Beattie, the diabetes champion at St Joseph’s Boys’ School in Derry, who knows the complexities only too well as she is also Type 1, and staff member Rosin McLaughlin is always on hand to help as well. Harry knows how vital it is to check his blood sugar levels regularly and keep track of the carbs and he wears an insulin pump which he administers himself when required. Speaking ahead of World Diabetes Day on November 14th, the teenager said that while he had missed a lot of P1 and P2 following his diagnosis, there was now better awareness in schools about diabetes and help with monitoring blood sugars. He also reassured any young people newly diagnosed with the condition that they can still pursue the same hobbies as their friends, including competitive sports. Like most lads his age, Harry enjoys playing football, is also a good swimmer and golfs twice a week. With entrepreneurship in the genes, he’s already considering dipping his toe in the family business where his mum Martina also works in Customer Service. Damian Wilson, who founded Click Energy - Northern Ireland’s fastest growing electricity provider – in 2015, said he was very proud that the eldest of their three children was a role model for young people with diabetes as a result of his own experience with the condition. “Harry is a very caring young man and diabetes hasn’t stood in his way, if anything it has made him more headstrong and independent. He loves ‘The Apprentice’ and is a big fan of Sir Alan Sugar so hopefully he will start working here at 16 to gain some experience.” Currently, there are 100,000 people living with either Type 1 or Type 2 diabetes in Northern Ireland, and this figure is on the rise, making the need for education and awareness surrounding the condition more important than ever. People with Type 1 diabetes cannot produce insulin. About 10 per cent of people with diabetes have Type 1. No-one knows exactly what causes it, but it’s not to do with being overweight and it isn’t currently preventable. It’s the most common type of diabetes in children and young adults, starting suddenly and getting worse quickly. Type 1 diabetes is treated by daily insulin doses – taken either by injections or via an insulin pump. It is also recommended to follow a healthy diet and take regular physical activity. Jillian Patchett, National Director of Diabetes UK Northern Ireland, welcomed the partnership with Click Energy which included funding for pilot programmes including a new role for Connections Ambassadors to provide help and support in diabetes clinics and also the 2018 Diabetes Volunteer Inspire Awards. She added: “The theme of World Diabetes Day 2018 is Family. We know how important it is to have a network of family, friends, colleagues, class mates and healthcare professionals who are all there for support when it’s needed. We really appreciate all the help we receive and encourage everyone to continue to raise funds and awareness about this serious condition.” ABOVE - Damian Wilson, MD of Click Energy and his son Harry (14) helping raise awareness for World Diabetes Day on Wednesday November 14th 2018.
ADVERTISEMENT - CONTINUE READING BELOW