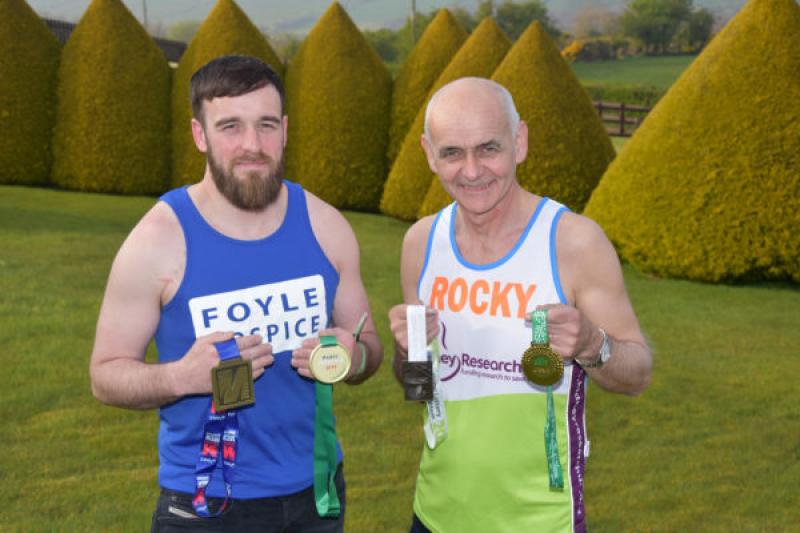 Two members of a Banagher family are gearing up to take on the London Marathon this weekend in aid of two causes which are very close to their hearts. Raymond O’Kane will take on the 26 mile course on Sunday, April 28 alongside his nephew, Christopher O’Neill (pictured above). Raymond has chosen to raise money for the Kidney Research UK charity while Christopher is running the marathon in aid of the Foyle Hospice. Raymond, who is Banagher’s senior hurling manager, says the charity is one which is close to his heart as he donated his kidney to his sister, Marcella back in 2008. Over the years, Raymond has completed four marathons, the most recent in 2011 when he raised funds for the National Kidney Foundation. Amazingly, for Christopher, this weekend’s marathon will be this third in three weeks. Just recently he completed the Manchester and Paris Marathons and hopes this weekend to complete the London Marathon in four hours or under. Speaking to the County Derry Post, Christopher, a joiner and former hurler with Banagher GAC, said he decided to run the three marathons in such a short space of time in memory of his late mother, Deirdre, whose 20 th anniversary occurs this year. “I’m not a runner,” admitted Christopher, who last ran a marathon ten years ago, “so to mark my mother’s 20 th anniversary I thought I needed to do something that was going to make me suffer.  That’s my main reason for doing this.” Christopher, who has been training for the marathons for the last seven months up to five times per week said the last two marathons were ‘tough’ but he is ‘looking forward’ to completing the third this weekend. Christopher, who lived in Australia for almost eight years before returning home in 2016, says he hopes to raise at least £7,000 for the Foyle Hospice which cared for his mother (pictured below) after she was diagnosed with cancer. 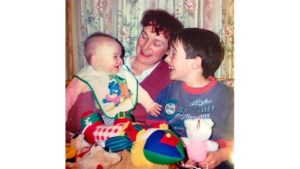 “Obviously the main reason for taking on this challenge is to raise money for the Foyle Hospice. It’s a charity very close to mine and my family’s heart as it’s where my mum spent her last few days and hours before she passed. We have also had other family members cared for in the hospice since then,” said Christopher. “I’m sure most of the Derry locals will have had dealings with the hospice at one stage or another and will know how invaluable this organisation is to the wider community in this area. It really can’t be overstated how important they are. “They rely heavily on donations which is why I’m doing what I’m doing.” To date, Christopher has raised over £5,000 with many people donating online or making cash donations directly to him. Primary four children at St Patrick’s Primary School, Loup and their class teacher Lorraine Young also raised £800 by holding a cake sale and making donations themselves. Meanwhile, Christopher is looking forward to having his uncle Raymond run the marathon alongside him. Raymond, an avid classic car enthusiast and member of family folk group ‘Brokade’, says that he is looking forward to completing the challenge. As Managing Director of Mastercraft Construction Ltd, Raymond has been fitting in his training with a busy work schedule which includes weekly work trips to London. He has already raised almost £7,000 for the Kidney Research UK charity. “I haven’t run the London Marathon before but I’m looking forward to it and I’m really looking forward to finishing it,” laughed Raymond. “It’s all for a very worthy cause and I’m looking forward to running it alongside Christopher.” Among the family members who will be cheering the Banagher men on this Sunday in London, will be Raymond’s wife Anne-Marie. Speaking last night, Anne-Marie said she is very proud of Raymond and Christopher. “We are extremely proud of both of them.  They are both very dedicated and have put a lot of training into this.  They are both wonderful,” she added. To donate to Christopher, click here To make a donation to Raymond, click here
ADVERTISEMENT - CONTINUE READING BELOW