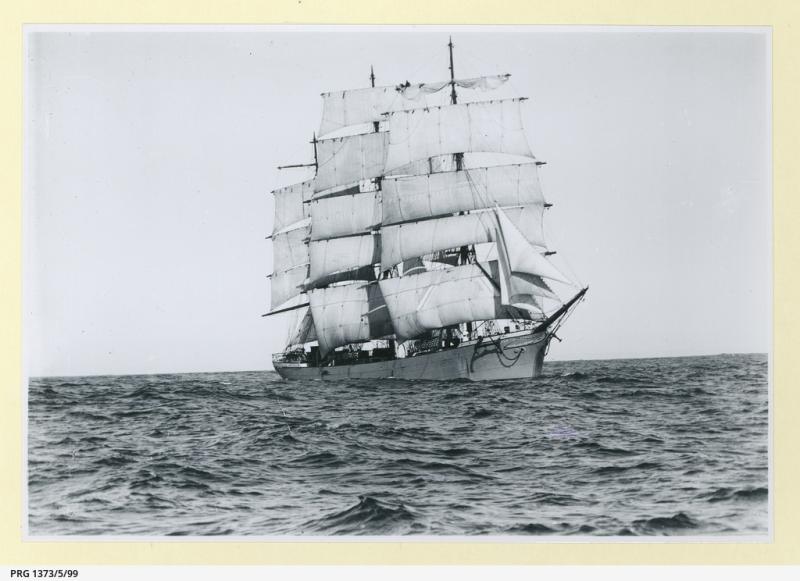 The death of William Mitchell almost 117 years ago aged around 60 in very tragic circumstances, largely heralded the demise of Derry’s much celebrated home grown shipping industry.

William Mitchell was born in Hull (exact date unknown) but came to Derry with his father, a master mariner. Together they established the Foyle Shipping Line which operated out of the city.

Mr Mitchell Snr was for many years commodore of the fleet of ships owned by Daniel Baird-a merchant engaged in trade with the West Indies and the United States of America.

His son William Mitchell started his business career as an apprentice at John Christy's merchant office on Foyle Street. After some years there he moved to William McCorkell's shipping offices where he gained experience of working with a large fleet of ships who traded in America.

In fact, the experience gained in both these commercial fields stood the young Mitchell in good stead for the years ahead. After finishing his connection with McCorkell & Co he entered into a partnership with a John Cunningham. And, when Mr Cunningham retired from business when he was appointed a Land Commissioner, Mitchell carried on the the business of importer and general merchant by himself.

It was around this time that William Mitchell had the Commercial Buildings constructed in the city and they are still there today on Foyle Street.

It was Mitchell's desire to maintain the strong and important trade of Derry's thriving port that gave him the idea to establish his own line of ships.

Derry's port has a centuries old connection to commercial trade. In 1664, King Charles II granted a charter to the city's Corporation giving it responsibility to oversee the flow of business to and from the city via the River Foyle.

In 1854, the Londonderry Port and Harbour Commissioners were set up to take control and it was at this point that the true strategic development of the commercial life of the river and lough began.

Within seven years of this, the Commissioners had spent £150,000 to enhance the port's facilities. From the old wooden bridge at the bottom of Bridge Street to the newly built dock at Meadowbank a line of quays were constructed and were matched by other quays on the Waterside. The city's tram and train network was placed to match up with the quays and ferry goods across three rest of Ireland.

The new graving dock at Meadowbank allowed large ships to be dry docked for repair. It cost £25,000 to build and was constructed with hard wearing granite walls and fitted with heavy oak gates.

When the dry dock opened in 1862, the first ship to be repaired there was the 'Zered' and was followed by the 'Doctor Kane'. These vessels were owned by the McCorkell and Cooke line's respectively and were locally owned and built.

The 'Great Northern', the first ever propeller-drive vessel was built in Derry by Captain William Coppin. When his shipping building business ventures took an economic hit, Coppin turned to repairs and used the graving dock for this purpose. And, when in 1873 he closed the repair yard, the Commissioners decided to open a shipbuilding yard next to the dry dock. It opened in 1886 and was leased to Charles Bigger who over the next 25 years built steel hulled vessels, a lot of which were constructed for local owners.

The port was also heavily utilised for passenger travel and chief amongst the firms to capitalise from this in a major way was the Allan Line. This company began a weekly service from Liverpool to Canada in 1861. Ships leaving the city stopped at Moville where local passengers got onboard. Mail was also ferried on these ships.

Then in 1866, the Anchor Line began a Glasgow-New York service which also called at Moville. Whilst the Allan Line service stopped at the start of the First World War, the Anchor Line, which later became the Anochor-Donaldson Line continued sailings to Canada until 1939.

In this era, Derry was the fifth largest port in Ireland with its commercial output growing steadily. The traffic across the Atlantic also played a major part in the port's overall growth.

William Mitchell began building ships around 1880 and the vessels were regarded as being a class above all the others constructed at that time.

These ships were amongst the last of the great deep water sailing vessels built anywhere and many of them were made by CJ Bigger at his shipyard in Derry. All facets of the building process took place in the city right down to the rigging and all the fixtures and fittings.

'The William Mitchell' was built in 1892 and was the last deep-water sailing ship to fly the British flag. Testimony to the ship's service came after her final demise when a native of Derry, Commander WB Piggot DSO, who later worked at the Marine Surveyor's Office at the Board of Trade in Belfast confirmed that he had served on the 'William Mitchell' as an apprentice.

Commader Piggot wrote that he had served on the ship for a period of 16 months between 1919-1920. At that stage the vessel was owned by a John Stewart of London and was eventually sold to an Italian firm who broke the boat up in 1928.

The demise of William Mitchell however came ironically upon the water-the very element that had made him such a successful business figure in the Victorian era in Derry.

A week earlier, Mr Mitchell had taken his wife and some of his family for their annual holiday to Warrenpoint, County Down.

The shipping magnates brother-in-law Dr Charles Hurford was also on holiday there and they decided after a visit to Rostrevor they decided to return to Warrenpoint by steamer via Carlinford Lough which ran between both points in the summer season.

Weather conditions on the day were described as fresh with a northerly wind blowing. The holiday makers booked passages on the pilot boat to take them out to the steamer which was around a mile off the shore at Greenore.

Once onboard the steamer, it was found to be rolling very heavily in the strong wind and William Mitchell, who was standing on its bridge, was thrown from it into the sea.

An exceptionally heavy lurch of the vessel threw the unfortunate man against the passenger rail which became free and could not stop his descent into the water.

The alert Dr Hurford managed to grab hold of William Mitchell's waterproof gear, but the coat couldn't stand the strain and his fate was sealed.

Reports of the incident say that Mr Mitchell rose to the surface almost immediately and his brother-in-law said he saw him swimming after the steamer which by this stage had been ordered to stop by the captain.

The doctor then cut a lifebuoy from its lashings and threw it to a sailor to throw towards Mitchell. But, by this time this was done, the businessman had disappeared beneath the waves.

William's wife Mary had died nearly 25 years before him, but now his children had an agonising six week wait before his remains were found.

The police at Barrow were able to identify the ship owner by papers located in his pocket and the family later received official confirmation of his death in the form of a letter from the  local constabulary which described a crest on his watch.

William Mitchell, of Queen Street in Derry was buried in the City Cemetery and his will recorded that he left personal wealth of almost £20,000 behind him. Today, that amount would be worth almost £2.5 million.

Public records relating to Robert Mitchell's death revealed that he had lived at Liscloon in Castlerock, Co Derry. He left his widow Nellie a sum of £36,500 upon his death-the equivalent of just over £2 million today. Nellie, who died on December 12, 1959, was the last to be buried in the family plot. Part of the inscription on the grave describes William Mitchell as 'Ship Owner and Merchant of This City.'