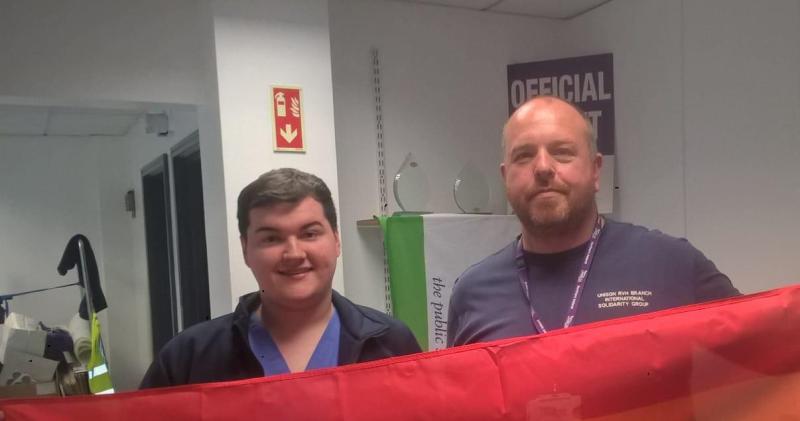 A trade union has said that strike action at Altnagelvin Hospital will be “absolutely inevitable” after a meeting with health staff this week. Unison represents around 2,000 staff at the Derry Hospital and it says that health workers in Northern Ireland are being treated “worse than second class citizens”. There is disparity in salaries between staff in NI and those living elsewhere in the UK, and pay for workers in the domiciliary care sector, for instance, falls below minimum wage when expenses are taken into account. Unison Branch Secretary, Conor McCarthy, told the Derry News that its industrial action committee will be meeting staff this week when the recommendation will be to lobby its members to take industrial action. He said: “The Department of Health has said that to close the pay gap between health workers in NI and the rest of the UK will cost £20millon. “We believe this is achievable given almost £200million has already been spent on agency staff. Strike action is most likely on the cards.” He added: “Strike action is absolutely inevitable, the pay parity issue in Northern Ireland is beyond a joke. We’re way behind with regards to the restoration of pay parity. “We’re also the only jurisdiction in the UK to have band 1 workers. The likes of domestic porters, caterers, etc. There is no band 1 in England, Scotland and Wales, they’re all on £17,000 and we would like to see band 1 eradicated here. “We’re currently working with employers to have that migration across to band 2 but in order to do that we need job description reconfigurations. The delay here is said to be due to the absence of a health minister, that is simply not true, the permanent secretary at the Department of Health has the powers to implement it here.” Workers providing domiciliary care can often be worse off as these services are outsourced to private companies. Mr McCarthy said that these workers aren’t paid mileage and have to use their own phones which means their level of income falls below minimum wage. Nurses based at the Altnagelvin Hospital were outspoken about their plight during a public meeting at the Guildhall organised by the Royal College of Nursing last week. They explained how they live in “constant fear” of making mistakes due to inadequate staffing levels and told those in attendance that nurses are now having to avail of food banks to make ends meet. The RCN believes the nursing shortage has become a public safety issue and services are now at “crisis point”. It said that in Northern Ireland there are over 2,500 unfilled nursing posts across the system, with a similar level of vacancies estimated in nursing homes. Nurses’ pay within the health service in Northern Ireland continues to fall behind England, Scotland and Wales. The salary for newly qualified nurses in Northern Ireland stands at £22,795, while their counterparts in England and Wales earn £24,214 and this rises to £24,670 in Scotland. Meanwhile, nurses in the Republic of Ireland have recently negotiated a new pay deal, with nurses there starting out on €29,000 and rising to €42,000. The real value of nurses’ pay in Northern Ireland has fallen by 15% over the last eight years, whilst the cost of securing nursing staff via nursing agencies has increased to an all-time high of £32 million in 2017-2018. These factors have a direct impact upon the health and well-being of the people of Northern Ireland, the health and well-being of nursing staff, with long waiting lists and waiting times, difficulties in accessing services, and nurses so over-stretched that they are simply unable to provide the level of care to patients and their families that they are trained to provide and want to provide, the RCN has stated. And it believes there is a link between nursing shortages, cost-saving measures and low pay. We are very aware of the frustrations and workload pressures facing health and social care staff. ‘Budgetary pressures’ Meanwhile the DOH acknowledged that health and social care pay policy is a devolved issue. A departmental spokesperson said: “We have made clear that UK-wide pay parity in health and social care would involve significant budgetary and pay policy issues that would require Ministerial and cross-departmental decisions. “The Department continues to face well documented budgetary pressures and cannot spend money it does not have. We were pleased to be able to finalise a 2018/19 pay award for health and social care staff and continue to invest in growing the nursing workforce.” The Department recognised the need for adequate staffing levels to deliver of “safe and effective care” and added that hospital staffing levels are the responsibility of individual HSC Trusts. “Nursing shortages are managed through a range of measures including effective rostering of staff, use of bank and agency nurses and active recruitment. “The Department’s policy, Delivering Care; Safe staffing in Northern Ireland provides a regional framework for determining staffing ranges across nursing specialities. “The Department is also continuing with the implement of the Health and Social Care Workforce Strategy, published in May 2018,” she added. Photo: Conor McCarthy of Unison on the right.
ADVERTISEMENT - CONTINUE READING BELOW