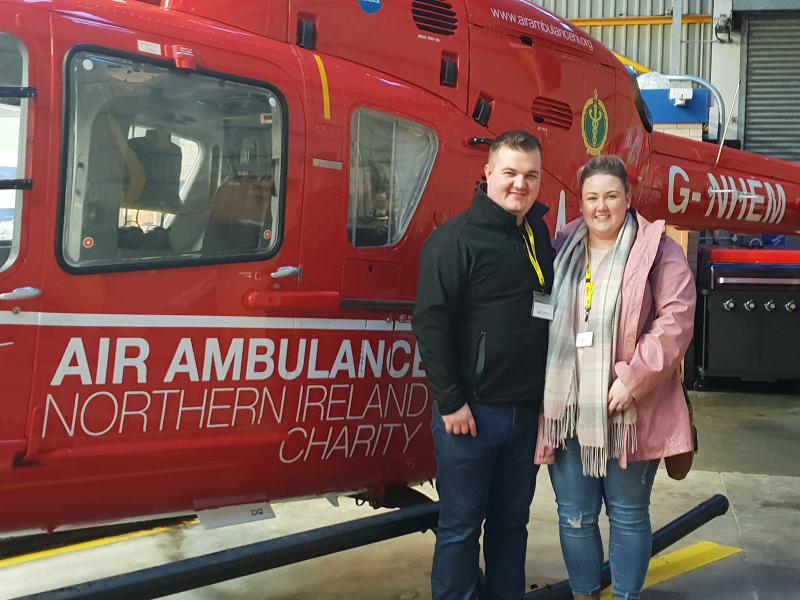 A Co. Derry motocross racer is one of many patients who are grateful for the rapid response of the Air Ambulance. Eoghan Kerlin from Dungiven was taking part in a quad motocross event in Cookstown in September 2018 when he required medical assistance. He was out on the track and unfortunately went over a jump at the same time as another competitor and collided at speed. Eoghan came off his quad in the air, landing on his right-hand side as he attempted to clear the jump. His wife Kerrie, who was at the event, immediately rang 999. Due to the nature of this incident and the high index of suspicion for potential injuries, the air desk paramedic who was monitoring this call spoke directly with Kerrie to gain further information. The air desk paramedic dispatched the air ambulance on the knowledge that Eoghan was badly injured and required immediate pre-hospital critical care interventions. A road ambulance was deployed and arrived shortly before the air ambulance. Eoghan had a seizure and was sedated by the HEMS team at the scene before being transferred by the air ambulance to Royal Victoria Hospital. The Dungiven man’s injuries were all down the right side and he had an open fracture in his leg, his femur was shattered, and he had broken ribs and a bruised lung. Speaking about the accident, Eoghan’s wife Kerrie said: “Standing on the side-lines and watching the accident was one of the worst moments I’ve ever experience, I really thought Eoghan was going to die. “Eoghan had a seizure at the scene which was incredibly frightening but when I saw the air ambulance coming into land my anxiety reduced. Within minutes of the HEMS team arriving, all the craziness seemed to calm, and I just felt so much more at easy as the team were so professional.” As part of his recovery, Eoghan visited the air ambulance base, and the home of the Air Ambulance Northern Ireland (AANI) charity, in Lisburn to meet the team who had helped him. He updated them on his recovery, saying: “I’m still undergoing treatment for my injuries and will have to have surgery on my kneecap which has unfortunately been damaged beyond repair. But I’m here and I’m on the road to recovery and every week there is further improvement. “I owe a great deal to all of the medical professionals who helped, and continue to help, me and I’m feeling positive about the future.” Kerrie added: “As a family, we know just how important the air ambulance service is and in recognition of this, we held a fundraiser in November last year and raised £2,400 for the charity. We wanted to extend a heartfelt thanks to every single person who contributed in any way to help. “We are forever grateful for what AANI has done for us and couldn’t imagine what the outcome may have been if they were not available.” The charity, AANI in partnership with the Northern Ireland Ambulance Service (NIAS), provides the Helicopter Emergency Medical Service (HEMS) for the region and responds to seriously ill or injured patients, seven days a week, for twelve hours a day. AANI requires £5,500 per day to keep this vital service going, meaning £2million must be raised each year. You can support the charity by joining Club AANI, an exclusive members club, for a weekly donation of £2. To find out more about the charity, how to join Club AANI or how to support AANI visit www.airambulanceni.org or call 028 9262 2677. Photo: Eoghan Kerlin and wife Kerrie visit Air Ambulance.
ADVERTISEMENT - CONTINUE READING BELOW